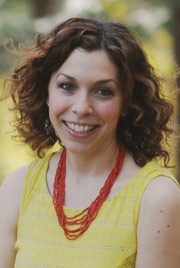 Jessica Ruthenberg is the Watchable Wildlife biologist for the Virginia Department of Game & Inland Fisheries.

Jessica grew up in the suburbs of Detroit, Michigan where she fell in love with nature at an early age by spending lots of time outdoors and by reading and learning about wildlife.

She earned a BFA in theatre design & production from University of Michigan and moved to Los Angeles where she worked on film and theatre productions for a few years, but took time to explore the glorious natural places out west between projects.

These outdoor adventures inspired Jessica to pursue a new path that would focus on helping others to connect with nature and wildlife. She worked for two years as a teacher-naturalist at the Debs Park Audubon Center and as an educator at the Los Angeles Zoo. In 2011 she earned a MSc in natural resources from University of Michigan with specializations in conservation biology and behavior, education and communication.

Jessica then worked as a field biologist for Texas A&M University studying golden-cheeked warblers and black-capped vireos and as a conservation specialist with Ducks Unlimited at their Great Lakes/Atlantic regional office.

She moved to Virginia in 2014 for her current position with VDGIF and lives in Norfolk with her husband and rescue dog. She has been loving exploring Virginia’s natural areas and their fabulous birding and wildlife viewing!

Thank you Canada...The warblers have returned to Virginia!