www.natureconservancy.ca > Home > Where We Work > Alberta > Faces of NCC > Staff 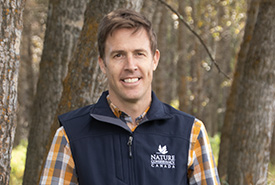 Tom Lynch-Staunton grew up in nature on his family-owned Antelope Butte Ranch (est.1885), an extensive cattle grazing operation on a primarily native rough fescue landscape in the southern Alberta foothills. After university, Tom moved back to the ranch and co-managed it with his brother for 13 years. Additionally, and with a love for the mountains and skiing, Tom worked many winters doing avalanche control and became a professional avalanche forecaster working at Castle Mountain Resort.

In 2011, Tom moved to Edmonton to work at Livestock Gentec, a livestock genetics program at the University of Alberta. Since then, he has held senior roles with the Canadian Cattlemen’s Association and, prior to joining NCC, with Alberta Beef Producers as head of government relations and policy. Tom received a bachelor’s degree in marketing and international business from Simon Fraser University and completed an MBA in sustainability from the University of Alberta.

Tom has been a mentor in the Cattlemen’s Young Leaders program, and has sat on various councils and advisory boards, including the Edmonton Food Council, and the Canadian Roundtable for Sustainable Beef, where he chaired the National Beef Sustainability Assessment and Science Advisory Committees.