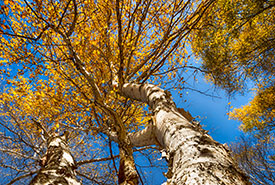 On this property are some of the only true old-growth forests remaining in Alberta. Here, the jack pines, inactive dunal sand ridges, groundwater fens and wetlands have created tremendous landscape diversity.

In 1974, five families bought Bunchberry Meadows Conservation Area — a parcel of land bordering Edmonton, near the Devonian Botanic Garden. For 40 years the families cared for the land, protecting important habitat for moose and numerous other species.

When the decision to sell the land was made, the family members approached NCC. Incredibly, these five families came together and agreed to sell their land for half of its appraised value in order to ensure it would be conserved for the people of Edmonton region of see, enjoy and connect with nature. Without this generous decision, this project would not have materialized.

Max Berretti, co-owner of the property, explains his motivation behind the project:

"It is so important that we protect as much of the wild spaces as we can; not just for us, but for everything that lives here,” says Berretti. “When I came to Canada 55 years ago, I fell in love with the wild spaces here. They make this country so unique and so special."

The campaign to conserve Bunchberry Meadows

Over the years Bunchberry Meadows has remained intact. But the surrounding lands and the city of Edmonton have undergone significant changes. Natural spaces in and around Edmonton continue to be developed. It’s increasingly difficult for city dwellers to find open green spaces to enjoy a sunny afternoon, or teach their children about the outdoors.

The campaign for Bunchberry Meadows was officially launched in Edmonton on May 21, 2015. Since then, Edmontonians have stepped up in support so that this special community amenity can be created.

Urban development on this property would mean the loss of habitat for many plant and wildlife species, and the loss of a wonderful space in which Albertans and all Canadians can reconnect with nature.

In June 2016, the Bunchberry campaign was closed successfully, and in 2017 the property officially opened to the public. (More information about access and site ethics here.)

The Edmonton and Area Land Trust (EALT) has become a significant and important partner on the Bunchberry Meadows Conservation Area by making a $1.5-million commitment to our campaign. Going forward, NCC and EALT will collaborate on the ongoing management of Bunchberry, including conducting wildlife species inventories, installing bird boxes and hosting public volunteer activities to steward the site.