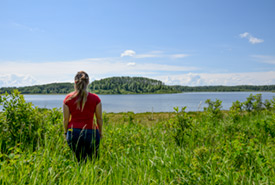 Located 100 kilometres southwest of Edmonton, the lake is situated within one of the biologically richest areas of Alberta. Nestled in a transition zone between the dry mixed wood boreal forest and the central parkland natural regions, Coyote Lake area supports more than 22 mammal species, 154 bird species (nine of which are imperiled) and 266 plant species (including a number of rare and uncommon orchids and Columbian watermeal — a species first recorded in Alberta at this site).

In 1996, Doris and Eric Hopkins fulfilled a dream they had been pursuing for more than 10 years: to make sure the lands surrounding Coyote Lake would be protected for the long term. Their generous donation of 130 hectares (320 acres) of land, along with the support of local landowners, the provincial government and the Nature Conservancy of Canada (NCC), ensured that the nature they loved would be protected for the long term.

Doris and Eric purchased this property in 1972 through a Canadian Pacific Railway auction. They built a house on the lake and for three decades they lived here together.

Very quickly, the Hopkins realized how special this property was, and it became very important to them to make sure this land remained in its natural state. They approached NCC about protecting this area, and they offered to donate their own property if NCC would buy the land across the lake. 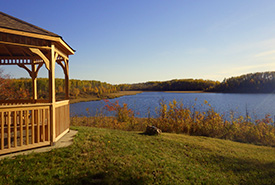 In 1994, NCC purchased two quarter-sections on the southeast corner of the lake. The Hopkins donated their two quarter sections of land while retaining the right to live on the property for the rest of their lives.

Because of the generosity of Doris and Eric, this property is as wild today as it was when the Hopkins bought it in 1972. Please be respectful of all the plants and animals that live here, and enjoy your visit.