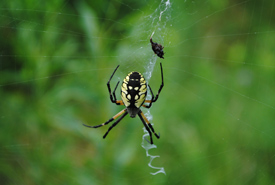 Garden spider at the Rice Lake Plains, ON. (Photo by NCC)

What comes to mind when you think of spiders? Is it an image of creepy-crawly-fuelled nightmare? Is it perhaps a helpful web-spinner who wrote messages in her web to save her friend Wilbur from becoming Easter ham? Or maybe it’s an image of one on its web, peacefully minding its own business?

Whatever image they conjure up, spiders tend to elicit strong responses from people. However, from a gardener’s perspective, spiders are more friends than foe.

Real spiders may not be sentient, benevolent friends like Charlette from the movie Charlette’s Web, that actively work with us, but they still make for excellent garden helpers. They’re voracious eaters and will hunt all insects indiscriminately. Flies, June bugs, leafhoppers, aphids, wasps, and mosquitoes are all on the menu.

Interestingly, some flowers and spiders have symbiotic relationships. Crab spiders find flowers such as daisies by following the floral scent. Once they find a home, they hunt by lying in wait for prey. However, the flower they select isn’t always a random process.

When attacked by other insects, flowers release more of the scent that attracts crab spiders. This cry for help attracts spiders to the flower, where they find a feast awaiting them. Charlotte may not protect pigs, but we can call her the guardian of daisies.

It’s also important to note that while spiders are efficient insect hunters, most are entirely harmless to humans. Many cannot even pierce human skin.

In Alberta, the only spider dangerous to humans is the black widow, a creature that only exists in the most southern regions of the province. They’re extremely shy and will only bite when threatened. To date, no serious injury or fatalities have been recorded by black widows or any other spiders in Alberta. 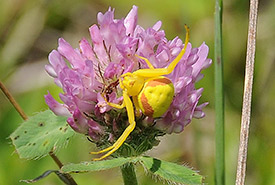 Finally, I think we can all take a second to appreciate how pretty some spiders are. In the photo to the right, a female crab spider sits on the daisy she calls home. Aside from admiring how well she camouflages herself, her combination of yellow body with pink markings is strikingly feminine and graceful. Not exactly a colour palette used in horror movies.

Fear of spiders is widespread, but here in Alberta, there is little to fear and lots to love. Spiders are truly a gardener’s best friend. A healthy spider population can cut down on the need for insecticides and they promote a healthy ecosystem. So, next time you see a spider in your garden, instead of running away, tip your hat and thank her for protecting your garden.