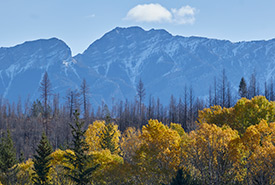 In 2004, the Nature Conservancy of Canada (NCC) acquired 1,255 hectares (3,100 acres) in the East Kootenay to establish Kootenay River Ranch Conservation Area. In 2020, we expanded this conservation area by 260 hectares (637 acres). Located in a rapidly developing valley, Kootenay River Ranch provides significant linkage habitat in the form of wildlife corridors that a wide range of animals can access to mitigate threats associated with development. 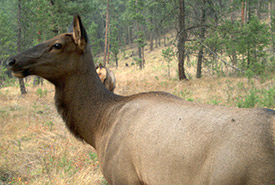 The Kootenay River Ranch Conservation Area protects a prime example of the typical valley-bottom habitats native to the Rocky Mountain Trench: bunchgrass savannah with areas of ponderosa pine, larch and Douglas-fir forest, and even small wetlands. The wetlands and small lakes that occur on the property provide essential habitat for migratory waterfowl, and riparian shrub habitat for warblers, sparrows and other songbirds. Grasslands, which are one of Canada’s most endangered ecosystems, prominently feature on this property.  Badgers, bears, elk and deer are just some of the wildlife that depend on this grassland habitat for survival. 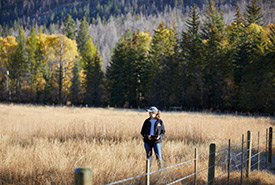 NCC is working to restore densely forested areas of Kootenay River Ranch to open forest and grassland. Historically the landscape around Kootenay River Ranch experienced periodic low-intensity wildfires, which kept the grasslands from filling in with trees and evolving into forest. Throughout the 20th century, as settlement in the area expanded, communities started to suppress fires. This caused the forest to become quite dense, reducing grassland grazing habitat for elk and deer. 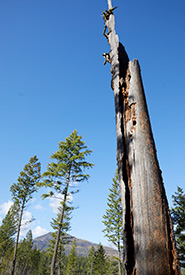 Since 2004, NCC has thinned the forest so the land can be brought back to its natural open structure. Not only is reclaiming an open landscape important for wildlife that rely on the grassland ecosystem in the East Kootenay, but the reduced density of forest cover can help lower the intensity of naturally-occurring wildfires. This increases the resiliency of these ecosystems and enables the land to recover after a fire.

As part of our forest thinning effort on Kootenay River Ranch, we leave some dead trees standing. Known as wildlife trees, these snags provide shelter for cavity-nesting birds like Williamson sapsucker and Lewis’s woodpecker. To date, a total of approximately 300 hectares (740 acres) has been restored on the Kootenay River Ranch.

Invasive plants pose the second largest threat to native biodiversity (habitat loss due to development is the first). Stewardship work at the Kootenay River Ranch also includes controlling the spread of invasive species like spotted knapweed and hound’s tongue.

By focusing on improving the condition and integrity of grasslands where they have been compromised, NCC can effectively manage this conservation area for the wildlife that depends on it. American Badger and elk particularly benefit from the ongoing ecosystem restoration treatment at Kootenay River Ranch.

Despite its name, the Kootenay River Ranch is no longer an operating cattle ranch. However, NCC honours its history by collaborating with a local rancher to provide sustainably managed grazing access for his cattle. A key part of the successful coexistence of conservation and cattle grazing is the protection of the numerous wetlands on the conservation area. In order to prevent the cows from trampling the sensitive wetland habitat, these areas are fenced off, and a portable solar-powered watering system supplies water for the herd. The cows do their part by fertilizing the grasslands.

This easily accessible property is open to the public. Vehicles, including off-road vehicles and bicycles, must remain on main roadways. Visitors are welcome to explore the conservation area by foot, but should be aware there are no official trails.

Many funders have contributed to the acquisition and stewardship of Kootenay River Ranch: