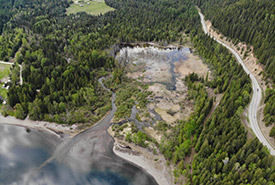 Deep in the Kootenays, Bonanza Creek pierces through the traditional territories of the Secwépemc, Syilx, Ktunaxa and Sinixt Nations. Here, the cold, clear waters of the creek offer refuge for migratory waterfowl passing through the Slocan Valley. Draining into Slocan Lake, Bonanza Creek and its floodplain give rise to a landscape interspersed with wetlands, forming the ecologically productive Bonanza Marsh Wetland complex.

On the northern end of Slocan Lake sits a five-hectare property that was cared for by the Alvarez family for more than half a century. In 2022, the family entrusted the Nature Conservancy of Canada (NCC) with the protection of this valuable land, fulfilling an inter-generational promise to secure a conservation future for Bonanza Marsh.

“When our parents, Arthur and Marguerite, bought the ‘swamp’ property in the early 1960s, they wanted to ensure that it remained unspoiled and undeveloped. Three generations of the Alvarez family have worked to keep it in a natural state, and we feel that our decision to donate that land to the Nature Conservancy of Canada is the best way to ensure that this remains the case in perpetuity,” said Henri Alvarez, on behalf of the Alvarez family. 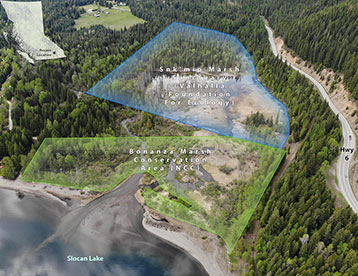 The Bonanza Marsh Conservation Area's wetlands form a significant and vital part of a larger marsh complex. These wetlands foster a rich and diverse population of wildlife and plays an essential role in maintaining water quality in the lake. The new conservation area borders the Snk’mip Marsh Sanctuary, which is stewarded by the Valhalla Foundation for Ecology. The marsh has long been an area of interest for local conservationists, and since 2017 extensive restoration activities have been helping the wetland recover from past industrial damage. The addition of the Alvarez's property to the protected area of the wetlands will help to ensure the ecological integrity of the larger marsh complex.

“The commitment shown by the Alvarez family to this land for more than half a century is amazing, and the Nature Conservancy of Canada is honoured that they have entrusted their legacy to our care,” said Richard Klafki, NCC’s Canadian Rockies Program director.

Every fall, Kokanee salmon journey upstream to return to the freshwater habitats that once nurtured them from egg to fry. Bonanza Marsh Conservation Area and its portion of Bonanza Creek serve as vital routes that many Kokanee salmon pass through to reach their spawning habitat. This dense gathering of salmon in Bonanza Creek also attracts grizzly bears that travel from the high elevation of the surrounding mountains.

The marsh provides important resting and feedings sites for migratory birds. In the winter, underground springs feed the wetlands of the conservation area and prevent freezing on the surface, making this a valuable foraging habitat for waterfowl. Around 150 species of birds including the bald eagle, pileated woodpecker and osprey use these wetland and riparian areas – green, vegetated zones between waterbodies and the land – for nesting and foraging habitat.

Past ecological assessments have revealed that the wetlands on Bonanza Marsh Conservation Area are still intact with native species, contributing to healthy ecosystems functions. The forested areas on this conservation area are over 80 years old, representing rare mature forest ecosystems in an area threatened by development. 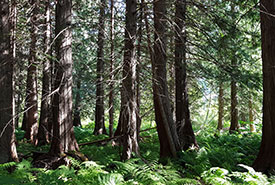 For grizzly bears, the Bonanza Marsh Conservation Area is an indispensable wildlife corridor in a landscape filled with mountainous terrain. With its forests and wetlands, Bonanza Marsh’s location on the valley bottom beneath the Valhalla and Goat mountain ranges connects separate populations of grizzly bears. Protecting lands in wildlife corridors reduces the threats grizzly bears face when their travel routes are fragmented, which can lead to population decline. Other mammals traversing between habitats, such as the wolverine, moose, and elk also take advantage of these valuable corridors.

Bonanza Marsh Conservation Area’s healthy ecosystems and connectivity to larger habitats for freshwater and terrestrial species make it an indispensable part of this wetland area. Its protection contributes significantly to the ecological health of the Slocan Lake watershed.

A portion of this project was donated to NCC under the Government of Canada’s Ecological Gifts Program. This program provides enhanced tax incentives for individuals or corporations who donate ecologically significant land.

Additional supporters who funded the project include the US Fish and Wildlife Service, American Friends of Canadian Nature Inc., Kicking Horse Coffee and Eric Grace.