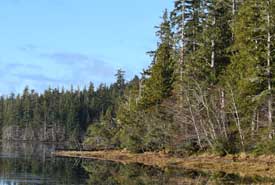 Gina ‘waadluxan gud ad kwaagi is something that the Council of the Haida Nation and the Nature Conservancy of Canada (NCC) aim to support, strengthen and restore in the Gámdas Tlagée Conservation Area. It is a central guiding principle to next steps of management in this rich habitat. 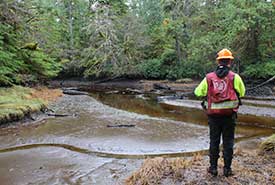 A primary focus for achieving giid tlljuus at Gámdas Tlagée is the restoration of the many networks of streams, wetlands and smaller tributaries that form intricate networks on the landscape. A dedicated team of fish biologists from CHN and Fisheries and Oceans Canada are looking at ways to restore and re-connect these waterways. This could mean redefining stream channels, removing heavy loads of coarse woody debris or modifying stream road crossings.