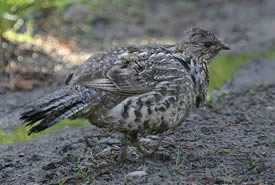 The ruffed grouse is a ground-dwelling bird that can be found in early successional, mixed deciduous forests. Ruffed grouse nest on the ground, often next to tree trunks, stumps or large boulders, where they form a depression in the leaf litter.

In the winter time, ruffed grouse have been known to dive into snow to rest for the night. This clever sleeping spot hides the grouse from night time predators.

Grouse are masters of disguise and their plumage varies, allowing them to camouflage to their surroundings as protection from predators. 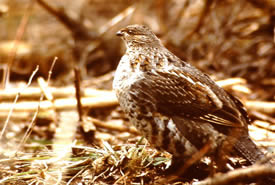 Drummers of the forest

The loud, drum-like sound made by the male ruffed grouse is used to attract a mate and defend the male's territory. The males create the drumming sound by flapping their wings in the air in rapid succession.

The males use a "drumming log" — often a log, stone or mound of soil — as a platform to stand on while drumming. The extra elevation allows the male to observe his territory for predators.