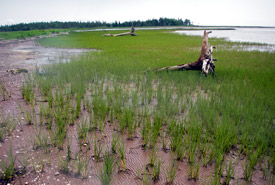 Located approximately 40 kilometres west of Summerside, the Percival River area is one of the wilder corners of PEI that local people cherish and few others have explored. As the area is low-lying and was always considered too wet for agriculture, much of its forests remain undisturbed.

The Percival River forest is mainly made up of spruce, but it also features aspen, birch, ash and eastern white cedar, characteristic of the Maritimes' mixed Acadian forest. Eastern white cedar is not common on PEI, and is usually found in swampy areas or on thin, limestone-based soils. A healthy cedar tree provides an array of benefits to wildlife: its seeds are eaten by many species of small birds and mammals, and its understory provides year-round protection for wildlife.

A variety of unusual fungi and lichens, ferns and wildflowers flourish in the forest, including several rare species of lichen. The Percival River area boats the widest diversity of lichen in PEI. Many species of lichen are sensitive to air pollution, and their presence and variety indicates a healthy environment.

Along with its important forest habitat, the Percival River feeds into Egmont Bay and includes ecologically rich wetland habitats that are critical to the life cycle of many populations of migratory waterfowl, shorebirds and seabirds. The largest unbroken tract of salt marsh in PEI is located along the Percival River.

NCC is pleased to be conserving land in the Percival River area, with the help of our conservation partners on PEI.

Our partners and donors

NCC wishes to acknowledge and thank the project donors, including:

To learn more about the Nature Conservancy of Canada’s work on Prince Edward Island and how you can contribute, please contact Faith Flemming, director of development, NCC, at Faith.Flemming@natureconservancy.ca.