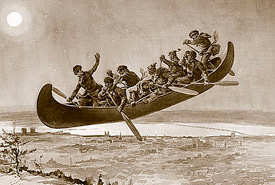 Our rivers carry many responsibilities. For years, they have been pathways for communication, making connections and sharing traditions.

Like any great journey, these rivers have stories. From coast to coast, myths and legends have been passed down for almost as long as rivers have run through Canada.

La Chasse-galerie, or the bewitched canoe, is a famous French-Canadian tale of fur traders and a deal gone wrong.

After a night of celebration on New Year’s Eve, a group of voyageurs decided they wanted to paddle their canoe back home to visit their sweethearts, but they faced the dilemma of making it back to work in the morning.

Versions of this legend differ, but the story always involves the group of voyageurs running a “chasse-galerie”: making a pact with the devil so their canoe can fly through the air with great speed. According to legend, the voyageurs broke some of the terms in the arrangement. For their punishment, the men now haunt the skies above the Gatineau River every New Year’s Eve. 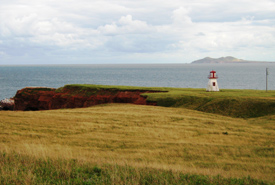 NCC has protected lans at the Magdalen Islands in the St. Lawrence River. No Old Moss Back sightings yet! (Photo by Andie Cloutier)

Despite Nessie the Loch Ness Monster making her home in Scotland, Canada has a few of its own mystery monsters making waves in folklore.

Jake Brennan is regarded as one of the most famous fishing guides in Canada. He was known not for the fish he reeled in, but remembered by the story of the one that got away.

While working as a fishing guide out of Gananoque Inn, near Ontario’s 1,000 Islands, Jake almost caught the St. Lawrence River’s most sought-after fugitive: Old Moss Back. After hours of fighting with the fish hooked on his line, Old Moss Back got away, leaving only a scale caught on the barb of the defeated fisherman’s lure.

While some of Brennan’s larger catches still adorn the walls of the Inn to this day, Old Moss Back remains at large, never to be seen again.

Maidens of lore and stone

Ontario’s rivers aren’t the only Canadian waters splashing with stories. BC is filled with spooky stories, including reported sightings of the infamous Sasquatch. There are also several reports of mermaid sightings in BC waters. 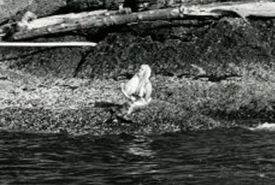 Mermaid on Mayne Island, BC, 1967 (Photo by Times Colonist)

In Squamish River, north of Vancouver, there is a story of a fishing guide who died soon after seeing a mermaid while out on the water. His fate cemented the idea among storytellers that seeing a mermaid is a bad omen.

Although no mermaid sightings in BC have been reported since 1967, the bottom of Mermaid Cove in Powell River is adorned with a stone statue emulating the same mythical creature seen by the fishing guide.

Telling the story of conservation

Storytelling is a lot like conservation. By telling stories of the past, we are helping remember the history of an area. Conservation works in a similar fashion: it keeps the land safe from the dramatic changes as a result of development and invasive species, so that it often looks much like it did in the past, and will remain into the future.

The Nature Conservancy of Canada is currently helping to protect more than 3,100 kilometres of rivers flowing across Canada. Conserving these watersheds means protecting hundreds of species that rely on them for their survival.

Whether you believe in these tales or not, the conservation of these rivers and many others is anything but fiction.