A pilgrimage to the great Thessalon pine 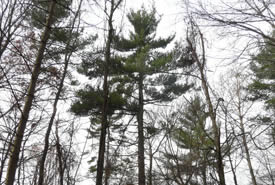 When a giant tree falls in the forest, does it make a giant sound?

One thing is for sure, when the Giant White Pine of Thessalon collapsed in 1997, it must have scared the heck out of local wildlife. And it would have been really shocking to any "flying" squirrels that a moment before were mere red squirrels clinging to its branches.

The eastern white pine is eastern Canada’s tallest tree. Before humans took to cutting them down, Ontario trees regularly grew to 140 feet, with the giants scraping the sky at 160 feet or more. The Thessalon Pine, sometimes called the Kirkwood Pine, was a 162-foot behemoth, the tallest in the province.

At its peak it stood as high as a 15-story building and was almost five feet across. From below you would not see a branch until about 80 feet up. In the 1800s this would have been the cream of the crop — one of the prime specimens coveted by the British for ship masts and then decimated by a century of logging.

The Thessalon Pine survived the liquidation of the giant pines, even though it lived in the middle of a working forest. It was spared the axe, the crosscut saw, the chainsaw and then the mechanized cutters of today. Growing at the bottom of a steep-sided creek valley, it would have been impossible to haul out in the days of horse-logging. The valley may also have given it refuge from fires and storms.

In the end it was foresters, along with other community members, who saved the Thessalon Pine and turned it into a tourist attraction. In the 1990s thousands of visitors came to marvel at this wonder of nature, and experienced interpretive signs, guided tours and spinoff information sites in the surrounding Kirkwood forest. I’m sure many a Thessalon resident remembers giving directions to city slickers looking to find the tree.

I never did get to see the Thessalon Pine in its heyday, but a decade ago I still made the pilgrimage to see the fallen giant. With an old pamphlet in hand I turned off the Trans-Canada and headed up the highway north of Thessalon. A decaying roadside sign about the pine directed me up the nearby dirt road, but to no avail.

After several dead ends and close calls with logging trucks, I went back to town to ask for help. I should have done that earlier. The first person I spoke with, the owner of a local general store, sang the praises of the pine and lamented its loss. He vividly recalled the days when busloads of tourists stopped (and shopped) before taking the 20+-kilometre drive north to visit the tree.

All that ended in June 1997, when the star attraction blew down in a windstorm.

Armed with detailed directions, I eventually reached a clearing piled high with logs; likely the entrance to the site. Realizing that this log landing had a fine granular limestone base, I knew I’d found the old parking lot! Walking around the perimeter I found the trailhead and followed a narrow gravel path to a creek valley. And there it was: the longest log on the ground in Ontario.

Skeleton bits of boardwalk still remained, and there was a gap in the log where tree “cookies” had been cut out for museum displays. But the final resting place was mostly natural and serene, with the giant lying peacefully alongside the creek that had nurtured it for three and a half centuries.

I climbed on top, walked its length and sat down to commune with the tree for a bit. I noted how it helped shade the brook and where small mammals left droppings along the stem. Walking back I accidently dislodged a toboggan-sized piece of loose bark. The exposed wood was covered with fungi, mosses, shavings from insect diggings, plus... a metre-long skin of an eastern gartersnake. The snake, itself a big specimen, must have used the gap beneath the bark to help it disrobe when it came time to shed.

I still feel a bit guilty about damaging the relic tree. But it helped remind me that the great pine has an afterlife. Trees are meant to die. And when they do, life goes on. They become food sources, nesting spots, boomtowns for fungi and microbes and, yes, places where snakes go to strip.

But where is Ontario’s tallest white pine today? Until recently it was the 147-foot beauty known as the "Monster" in the Haliburton Forest and Wildlife Reserve, southwest of Algonquin Park. But it too has died and is dropping (literally) in size as it decays. Still, it now stands as the tallest dead tree still upright in Ontario; an upstanding member of the forest community.

So the question stands, where can people go to see Ontario’s tallest living white pine tree, and to perhaps hear the sound of wind blowing through its towering crown?

That is something worth looking into.