A summer for nature 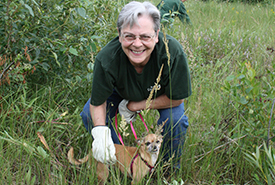 So why did I take the summer off to volunteer for the Nature Conservancy of Canada (NCC)?

Well, let’s see. Several years ago, at the first NCC event I ever participated in, I was greeted with an undulating purple sea of four-foot-tall Canada thistle. In all honesty, pulling thistle out of that cement-like clay was hard work. There was a lot of huffing and puffing and a lot of frustration being released, followed by very short breaks between pulls. Numerous times, as I pulled out one little bugger, another would slap me in the face. Although the group busted a gut that day, it was plain for all to see that we hadn’t begun to contain the wave upon wave of weeds.

As I drove home that evening, I pondered, “Is this really how I want to spend my time?”

The following year I tried again, but this time it was a barbed wire tear-out. As I approached the start of the fenceline, I managed to step on a bee hive. Statuesquely I stood my ground as the bees swarmed me and fortunately only one little beggar found his mark.

As the day was coming to a close, everyone shifted into a higher gear. I was hustling to get around the bog, when I felt this cool sensation. Reaching back, yeah, wouldn’t ye know it; I’d managed to slit the thigh open on my jeans while skidding my butt over a fallen poplar. That was five years ago. This year I managed to slit the thigh open on the front of my jeans while rolling up barbed wire. I think I’ve finally learned: wear grubbies. Oh well, now I’ve got some great looking cut-offs.

There have been numerous times when I’ve busted a gut, trying to dig or pull some hunk of junk out of the ground, and I just know I’m gonna pay for it. The bruises I sustained as the ground suddenly let go and I so “elegantly” crashed to the ground. The achiness and soreness I acquired as I strained to work out every muscle, which I had so graciously allowed to hibernate throughout the winter. Oh well, it’s nothing that a long, hot soak in a tub of Epsom salts can’t remedy.

With these wonderfully inspiring experiences, why wouldn’t I want to volunteer?

Well, that would be because of the other side of the coin.

In addition to knowing you are making a positive contribution, there are numerous additional benefits to volunteering. It’s about strangers who become comrades. It’s about those precious moments of euphoria when nature allows you to share a part of its private and secretive life. Like one volunteer who not only saw her first moose in the wild, but it had antlers as wide as her smile and as big as her arms could spread. Another volunteer stood transfixed, joyfully observing two coyote pups, play-fighting with each other and their mama.

It is fulfilling the dream of conquering one’s fears and exploring the unseen. As a lone woman I would never venture into heavily populated predator zones. This year, however, as a Conservation Volunteers team member, I fearlessly worked in just such a habitat and my reward was abundant, magnificent vistas.

The other side of the coin is about learning numerous new ways humankind can positively impact our natural environment. Whether it is reclamation, repairing, maintaining or sustaining it all leads us to the same destination.

Volunteering with NCC has helped me come to the realization that balance and harmony, amongst all living species, leads us back to the path of peaceful coexistence while teaching us about our interconnectedness and our absolute dependency upon nature.

I am both humbled by nature’s complex simplicity and grateful for all the life lessons, wisdom and gifts she has shared with me. I am also very grateful to the Nature Conservancy of Canada for providing me with numerous opportunities to pursue my ideals, fulfill my dreams and support my values. Thank you to all who have made each event a true blessing. My summer with the Conservation Volunteers program has been a summer filled with lots of laughter, an ache or two but primarily grace.