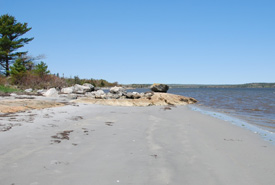 In May of 1604, Samuel de Champlain sailed down Nova Scotia’s southern coast and mapped all he encountered. Early in his voyage, he came across a harbour so beautiful that he named it Port Joli. Of course, he did not know that the indigenous people of Nova Scotia, the Mi’kmaq, had already named the harbour Pemsik (or ěmŭsk), a name referring to its spectacular sandy beaches.

Four hundred years later, Port Joli still lives up to its names. Kilometres of glistening beaches, rimmed by pristine forest, present one of the finest coastlines in Nova Scotia. This sensitive ecosystem has been designated a priority site by the Nature Conservancy of Canada (NCC), who have acquired more than 475 acres (190 hectares) of property along Port Joli’s shoreline.

Because of these efforts, substantial portions of Port Joli’s ecosystem, especially on the south coast of the harbour, have been protected. In fact, in conjunction with Thomas Raddall Provincial Park, nearly seven kilometres of linear shoreline and nearby forest have been protected on the south side of the harbour (more shoreline is protected on the north side, by Kejimkujik National Park). 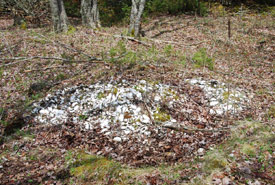 An ancient shell midden in Port Joli. The clam shells on the surface indicate the site was previously damaged by artifact collectors. (Photo by Matthew Betts/Canadian Museum of History)

The benefits of this conservation work to Port Joli’s ecosystem are clear, but less well known is that these efforts have also greatly benefited the archaeological resources of the harbour. Port Joli contains one of the densest concentrations of ancient Mi'kmaw (the singular of Mi'kmaq; it is an adjective in circumstances where it precedes a noun) archaeological sites in Nova Scotia. The harbour is known to contain at least 21 ancient middens, which contain the remains of clam shells and other archaeological materials discarded by Mi’kmaq who lived there thousands of years ago. These sites are unique because the calcium carbonate in the clam shells neutralizes the soil, resulting in excellent preservation of organic materials, especially animal bones. Normally such materials would completely dissolve in Nova Scotia’s acidic soils.

Some of the largest known shell middens in the Maritime provinces are located in Port Joli, representing an unparalleled opportunity to explore Mi’kmaw archeology. Since 2008, the Canadian Museum of History, in collaboration with Acadia First Nation, the University of New Brunswick and the Nova Scotia Department of Natural Resources, among others, have been surveying and excavating shell midden sites in Port Joli. 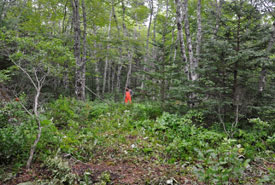 A shell midden site, deep in the forest on NCC property. These sites are typically treeless, making them easier to locate in the dense forest. (Photo by Matthew Betts/Canadian Museum of History)

The E’se’get Archaeology Project (E’se’get is a Mi’kmaw word meaning “to dig for clams”) seeks to define the precontact culture history of Nova Scotia’s South Shore — a region that has received little professional archaeological study to date. In 2012, with a research permit from NCC (and an archaeological permit from the Nova Scotia government), the E’se’get Project team conducted test excavations at a large archaeological site located on NCC property.

Dark soil and broken shell can be seen in the test excavation. This was likely a living surface of some kind, perhaps the floor of a wigwam. (Photo by Matthew Betts/Canadian Museum of History)

The site is unique in many respects. First, unlike the majority of Port Joli middens, which are located within 100 metres of the coast, this site is located over 400 metres inland. It is also very large, covering at least 600 square metres. The site contains a dense concentration of rich, organic soil, likely the remains of wigwam floors constructed here over many generations. Several shell heaps are located at the edges of the site, where its occupants discarded clams, animal bones and broken artifacts. 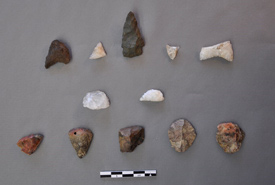 Artifacts were more numerous here than any other site we tested in the harbour. Though our excavations were small, we discovered large numbers of stone tools and the flakes from their manufacture. Abundant fragments of ceramic vessels were discovered, in addition to well-preserved animal bones. An analysis of the animal bones indicates that a wide range of species were consumed at the site, including white-tailed deer, snowshoe hare, harbour seal, lynx, sturgeon and a variety of waterfowl. A radiocarbon date taken on a deer bone taken from the site indicates that the area was occupied between about 700 and 800 years ago, or about 350 years before the arrival of Champlain. 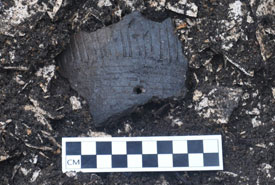 What was this site used for, and why was it so far inland? Our hypothesis, developed by comparing this site to others in the harbour, is that this was a large summer seasonal camp, where multiple families came together to hunt, fish, and collect shellfish during the warm months. Its location, far inland and adjacent to an ancient stream and a nearby lake, provided ample access to numerous forest and freshwater species. And yet the site was less than half a kilometre from the harbour, providing easy access to its rich ecosystem. In short, the site it was perfectly positioned to access all the resources Port Joli had to offer. 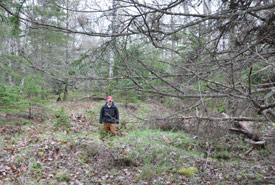 An archaeological site in Port Joli, destroyed by the activities of collectors. An archaeologist stands in one of the dozens of pits they created. (Photo by Matthew Betts/Canadian Museum of History)

Unlike many sites in the harbour, this site has been relatively untouched by development and “pot hunting” activity (a tradition of local collecting by hobbyists that has destroyed many sites in the region). Now that it is under the stewardship of NCC staff, the site will be protected from collectors and development and its scientific and cultural integrity will be protected for future archaeological investigation.

We are currently analyzing the nearly 22,000 artifacts we recovered and we are working on a monograph that describes the culture history of Port Joli. We would love to go back eventually. This unique site on NCC property is one that has the potential to reveal much about Mi'kmaw life in centuries prior to the arrival of Europeans.

(Below: a time-lapse video of the excavation of a 1,500-year-old wigwam (house) floor in Port Joli.)

Matthew Betts is the curator of eastern archaeology at the Canadian Museum of History.