Battling Buckthorn: NCC teams up with the Friends of the Pugwash Estuary for the fourth annual Buckthorn Beatdown 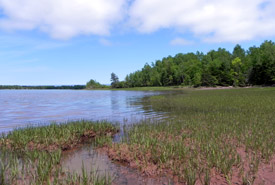 The Pugwash Estuary is a unique mixture of forest, marsh and sandy beaches (Photo by NCC)

On June 8, staff from the Nature Conservancy of Canada (NCC), Conservation Volunteers, the Friends of the Pugwash Estuary and the McMillan Forestry group braved hordes of mosquitoes to remove invasive glossy buckthorn at the Pugwash River Estuary in Cumberland County, Nova Scotia.

This species arrived in the 1900s as an ornamental plant and has since run rampant in forests and wetlands of Canada, from Nova Scotia to Saskatchewan. Glossy buckthorn spreads to new areas when its seeds are eaten by birds and other wildlife. The plant also spreads widely due to its complex root network. This shrub may look very tree like as it can grow up to 20 feet tall, but can be distinguished from similar species such as wild raisin and speckled alder by its unique glossy leaves and spotted bark.

Glossy buckthorn is particularly problematic in the Pugwash Estuary where just four years ago it dominated the understory, preventing native vegetation growth.

During the event volunteers worked to remove the invader by pulling up small individual plants and cutting down larger ones. After the stem is cut, a mild herbicide is applied with a paint brush to prevent the buckthorn from regrowing since it can regrow from just a few roots.

It is estimated that at each of the four Conservation Volunteers event 5,000 buckthorn plants have been removed. That’s almost 20,000 plants removed to date! Members of the Friends of the Pugwash Estuary commented on how much the understory has changed in a short amount of time. Native trees such as red maple, white birch and trembling aspen have been able to establish in the understory, while other native shrubs and herbaceous plants have returned to the forest floor.

However, the battle isn’t over yet; glossy buckthorn still rages on in other parts of the estuary, always threatening to spread to new areas or re-colonize the removal areas. 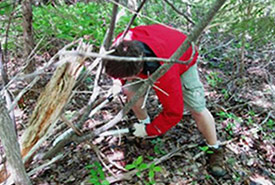 Hopefully with continued support of Conservation Volunteers, management of glossy buckthorn on NCC property will be successful within the next few years.

The Pugwash Estuary is one of NCC’s focal regions because of the unique mixture of forest, marsh and sandy beaches. NCC has already secured 1,030 acres (420 hectares) in the estuary over 11 properties.

The Pugwash Estuary is the largest estuary along the Northumberland Strait of Nova Scotia. It supports species at risk such as barrow’s goldeneye, as well as iconic Canadian species like Canada geese and great blue heron.

With such a diversity of habitats and species it is obvious why management of glossy buckthorn and other invasive species is of the utmost importance.

Our next event in Nova Scotia is trail maintenance on July 12 at Gaff Point, Lunenburg County.  To get involved with upcoming events in Nova Scotia, sign up today at www.conservationvolunteers.ca. 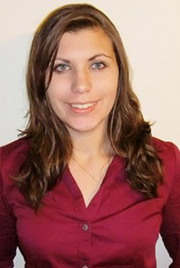 Jamie Fraser is a former stewardship intern for Nova Scotia. She holds a BSc from the University of Western Ontario in geology.