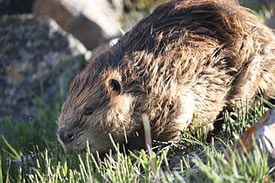 Beavers were once endangered throughout much of their range, but have made a remarkable comeback over the last century. In Canada, they are found in rivers, creeks and lakes. They have even been observed in creeks and rivers within many major cities. 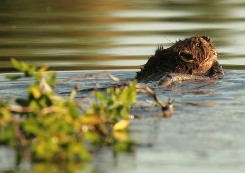 BWW declared April 7 International Beaver Day to honour Dorothy Richards, also known as the “Beaver Woman,” whose birthday fell on the same day. Before her death in 1985, Dorothy studied beavers for 50 years, allowed two beaver families to live in an addition to her house at different times and wrote a book called Beaversprite: My Years Building an Animal Sanctuary.

To celebrate International Beaver Day, here are 10 fascinating facts about these iconic and industrious rodents.

1. Beavers construct their lodges, which can only be accessed through underwater entrances, in ponds, along river edges or in the shallow bays of lakes.

2. When swimming, beavers use their webbed feet as paddles and flat tails as a rudder.

3. Beavers are one of only a few mammals capable of re-engineering the landscape.

4. To waterproof themselves, beavers rub castor oil, produced from a gland near their tail, through their fur using their split toenail (grooming claw).

5. Beavers remain active throughout winter and can swim and forage under the ice.

6. A beaver colony consists of two parents, young kits and yearlings born the previous spring, all under one roof.

7. Beavers can swim at speeds of up to eight kilometres per hour.

8. Beavers are herbivores. Their main food source includes tree bark and cambium, the thin layer of tissue that grows just under the tree's bark.

9. A beaver’s incisors (teeth) continue growing throughout its life.

10. Beavers are mainly active at night.