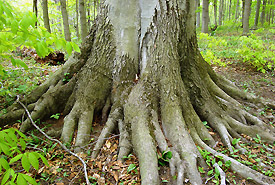 While hiking through some of Ontario’s forests, you may notice that the beech trees look infected by something.

During my undergraduate studies in biology at Western University (formerly known as the University of Western Ontario), I learned of beech bark disease (BBD) through one of my professors, who taught ecology and statistics and worked in the Adirondack Mountains. We came to realize that beech bark disease was a popular study topic, yet there was little research that focused on the factors affecting its spread throughout North America — thus the creation of my thesis study. 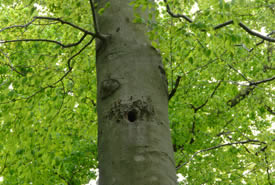 With white, waxy spots as the symptom of the infection, BBD comprises a close association between an insect and a fungus. This disease is unique because of this insect-fungus relationship. The fungus is native to North America, but the beech scale insect is invasive.

The geographic distribution of beech trees extends from the Maritimes to southern Ontario, but the majority are in the eastern United States. Although the disease is very much present in Ontario forests, the more prevalent and recent cases are in the U.S. The southward spread of the disease from the insect’s introduction point has had a significant negative impact on the health and quality of beech trees, as well as a change in forest structure where beech is present, creating a negative ripple effect on the organisms that live in the presence of this disease. 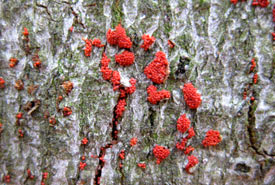 In my thesis study, I investigated the variables that could have affected the rate of spread of the disease: precipitation, topography, temperature, wind and beech abundance. Investigation was done by reviewing facts already known about the disease through previous scientific literature, but mostly by doing the primary research myself. This included using a map showing beech abundance, extracting data from the National Oceanic and Atmospheric Administration to obtain information for temperature, precipitation and wind, and using a mapping program called ArcGIS to extract information about topography. I only slightly touched upon the other species that were potentially affected, such as mammals that eat the nuts of the beech tree as a food source. The loss of canopy cover due to the higher mortality of beech trees changes the forest structure, which also affects different plant species.

By the end of my study, I found that precipitation and beech abundance had significant impacts on the spread of BBD. There is no effective method of stopping the spread of beech bark disease; however, there are measures that can be taken to prevent its further spread. For example, transporting wood between two separate locations should be avoided to decrease the chance of transporting infected wood to a new area. Another method is to scrub infected bark to prevent further penetration of the scale in the tree and ones nearby. Reducing the insect population and its spread are the most important methods in reducing the spread of BBD.

Rainfalls greater than five millimetres between August and October slowed down the spread of BBD because they decreased the abundance of first larvae of the scale insects that were able to live on the tree. Spread of BBD was also found to positively correlate with the abundance of beech trees. Topography was found to have little to no significance, but the data available for wind and temperature were not sufficient enough for concrete findings.

My study definitely opened my eyes to the severity and impact beech bark disease has on not only the beech tree itself, but other species that rely on beech. Before I started my study, I did not give beech trees much thought. They were overshadowed by the more popular and "Canadian" trees, from my perspective. After my study, I had learned a great deal about beech bark disease and it has allowed me to easily identify the disease when I go hiking. 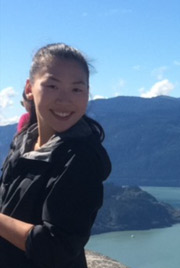 Ellen Kim is a graduate from Western University with a degree in biology.