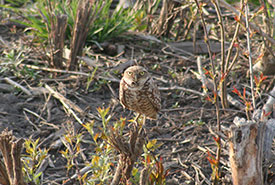 The burrowing owl is the bird that really started it all for us on Pelee Island. On a whim back in April 2008, we decided to bird on the island, and, incredibly, found a burrowing owl. (Photo by Mike Burrell)

We had an interesting first visit to Pelee Island back in September 2001, where we “dipped” (missed) a trio of wood storks that had been on the island the entire summer, only to have had them leave the evening before we managed to make it down there. Despite missing the wood storks, the allure of the island was obvious and hooked us both. Ken even ended up doing field work for his master’s degree here. He was studying bird migration and the effects of weather during the springs of 2010 to 2012. It was during these magical times that we really explored the island and the Nature Conservancy of Canada’s (NCC’s) lands here, in particular. 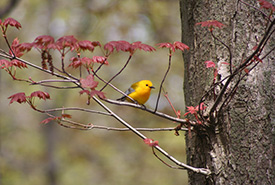 Found in only a few locations in Canada, Pelee Island has supported a pair of prothonotary warblers at Fish Point in recent years. (Photo by Ken Burrell)

Birding on Pelee Island requires some expertise, since there are only around 200 residents and even fewer birders there on any given day in the spring. But we’ll let you in on a little secret: Pelee Island is just as good as the “big” birding areas you may have already heard of (or been to) around Lake Erie: Point Pelee, Magee Marsh, Rondeau and Long Point.

During spring and fall, Pelee Island and the NCC properties on it provide an important haven for tens of thousands of songbirds making their way to and from their wintering and breeding grounds. Birding on any of the numerous NCC lands on the island provides a taste of some of the best birding in Ontario, as outlined in our book Best Places to Bird in Ontario. 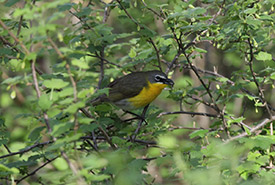 Listen for the raucous and bizarre calls of the yellow-breasted chat on the Stone Road Alvar, Stone Road Alvar-Krestel Parcel and Harris-Garno properties, owned and operated by NCC. (Photo by Mike Burrell) 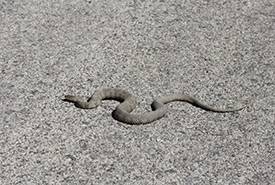 Lands close to Lighthouse Point Provincial Park are home to blue racer and Lake Erie watersnake, both of which are found nowhere else in Canada. NCC properties provide some great lands to check out. Brown’s Woods is our unquestionable favourite, while the Harris Garno, Stone Road Alvar and Stone Road Alvar–Krestel Parcel lands aren’t far behind.

It’s also an exciting component to NCC’s land securement program that an ambitious new wetland restoration project has been started on Pelee Island. Historically, the island was one large marsh, with three upland areas, until the mid-1800s, when it was cleared and drained to make way for agriculture. Today, some of these areas are being restored to help the island’s unique biodiversity and provide places that birdwatchers and other visitors can explore.

Checking out any of the NCC properties on Pelee Island will open your eyes to the great work being done by NCC and the amazing opportunities to connect with nature and birds. 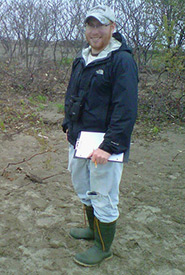 Ken and Mike Burrell are the authors of the book entitled Best Places to Bird in Ontario.