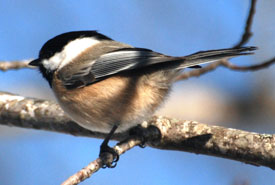 You're not going to believe me. I'm going to tell a story with a crazy little hook and you're going to tell me I'm making it up (even after I show you the photos) or making a big deal out of nothing. But it is a big deal, so here goes.

A couple of weeks ago, one of our conservation agreement holders wanted to meet and show me around. I'm new-ish to the area so I agreed to a day of riding, walking and talking. We met at Giles' house on the edge of the Touch Wood Hills. The Touch Wood Hills is a fair chunk of forest (yes, forest) northwest of Saskatoon surrounded, pretty much, by fields and fields and a few more fields. As far as I know it is bumpier than most of the province and must not have much for soil, because it is one of the few places in the province where even the persistent road builders kinda just didn't persist with their roads. 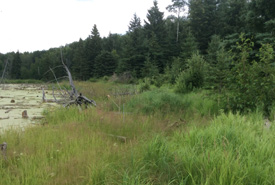 Touch Wood Hills in the summer (Photo by NCC)

Giles built his house on a quarter section of what used to be spruce, pine and aspen forest in one of the few parts of the province where the term "end of the road" actually applies (hint, because usually grid roads go on forever). The house (and really the yard, too) is beautiful, rustic, has pictures of Giles planting trees (okay, not the yard; it just has trees he planted) more than a few years ago and a big wooden box of what I thought was cat food, in the front porch. It has everything you would expect in a home built by someone you know loves living in the bush.

Giles invited me in for tea so we could plan the day and pet the cat. On the way out he grabbed a handful of something from the bin by the door, and we jumped into his truck and scooted down the road to begin the tour. 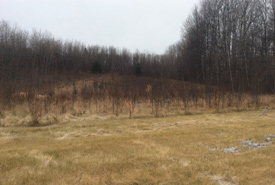 We spent the day within a few miles of his yard. He told me the stories about the area. How a particular patch of birch had come to be there. How this hay field had been planted to trees on a certain date. How this wetland had cycled during dry and wet periods, contracting and expanding. He even showed me where the local beavers were digging a trench through an old dam (you could tell it was a beaver doing the work because it looked like a bunch of work, was about a beaver wide and they didn't use dynamite) to drain a pond and fill another.

All during this he gave me a detailed human history of the area. Not just of his piece of land but every piece nearby, including the parcel the Nature Conservancy of Canada owns right next to his. And it was then that I realized that the reason I trusted him wasn't because he managed to charm chickadees from the air to eat from his palm, but because to be able to do that he had to be paying attention.

Oh, did I forget to mention that it wasn't cat food in the container by the door? Nope, it was bird feed. 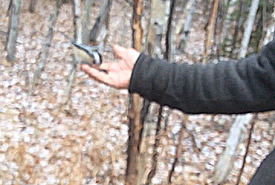 When the day started and we got out of the truck several hundred metres from his house, a couple of birds started bombing him for their usual feed. Yeah sure, he said, it takes a little while to train them and the younger generations aren't as sure as their parents, but eventually they come around.

So, yeah, Giles is paying attention to detail and he has patience. That's the only way I figure you manage to train all the chickadees within a mile or two of your home to eat from your palm. So when he was talking about the trees he planted here and ones that went there and why he planted in clumps instead of a whole mess across the land, I was pretty sure he was on to something and I wanted in. And maybe you want in, too, because hangin' out with Giles is pretty cool.