Born to be wild on the Musquodoboit River 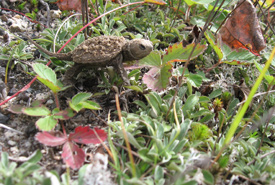 Baby snapper from a 'turtle's' eye view (Photo by NCC)

In early fall, a small group of Nature Conservancy of Canada (NCC) staff and supporters had an amazing encounter with newly hatched snapping turtles, while on a trip to the Musquodoboit River. Sixteen participants, split into two groups, took turns canoeing and hiking into NCC’s newly protected property near Gibraltar Rock, about 20 kilometres north of Musquodoboit Harbour. 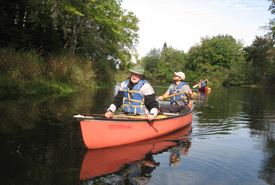 The first group, led by NCC Stewardship Coordinator Doug Van Hemessen, walked in to the site along the Musquodoboit Trailway. Once on NCC’s property, Doug pointed to some small hollows in sections of the sandy trail: snapping turtle nests that had been robbed of their eggs by foxes or raccoons. The group walked on and met the second group, who had paddled down the river, led by Pat Nussey, NCC’s conservation planner. (Thanks Pat, for wading into the cold water and pulling our three canoes past those boulders!)

After lunch, the paddlers and hikers switched spots, and they headed back down the trail or paddled back for the return trip to their cars. By this time, it was about 1:30 in the afternoon, and with the sun out, everyone was enjoying a very warm day for early October. 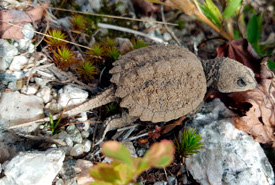 Suddenly, one of the groups noticed a tiny traveller on the trail: a newborn snapping turtle was emerging from a small hole in the sand! With a shell about the size of a loonie, it would have been easy to miss.

Both groups gathered around to watch the turtle head toward the marsh, instinctively knowing the right direction. Many had the overwhelming feeling of wanting to pick it up and carry it to the shallow water, about 100 metres away. Due to an extremely dry summer, the water levels were lower than usual, and it seemed like an incredible marathon ahead for this tiny, threatened creature. However, the group was wisely advised that the baby snapper needed to make its own way there.

Then, more babies emerged, poking their sand-covered heads and grumpy-looking faces out of the small opening! Someone spotted a few more holes, and for 20 minutes, the group watched in wonder as 14 newborn snapping turtles crawled out of their nests, across the trail and disappeared into the grass, all heading toward the water. 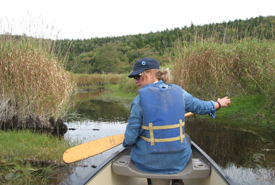 Keeping an eye on the water for passerbys (Photo by NCC)

After three months buried in the sand, the turtles had survived predators and then emerged in the few minutes we happened to be walking by! It was an incredible sight, and everyone felt very lucky to have been there to witness these turtles taking their first tiny but steady steps in the world.

Thanks to our supporters and the land owners who entrusted their properties to NCC, snapping turtles and other species at risk now have a permanently protected home along the Musquodoboit River. 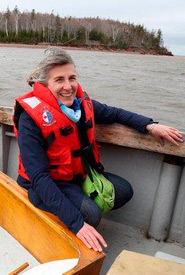 Kathryn Morse was the Atlantic director of communications with the Nature Conservancy of Canada.