Bossing the burn: Part one 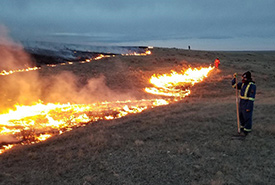 Those of you who have met me know that I’m a pretty big, intimidating guy. Braggadocios, people have said. Bold, even. I mean, you know if you’ve seen me that I’ve got what you’d call a bit of swagger when I walk across the prairie. “Wish he wouldn’t yell so much,” I’m pretty sure I’ve heard my colleagues Ryan Dudragne and Sarah Ludlow say during our many conference calls. And though I don’t suppose I’ll ever see my supervisor, Cameron Wood, cower when I enter a room, I’m certain it is only partially because he works in Regina and I work in Osler, Saskatchewan, and we really don’t spend that much time in the same building. Still, I think you get the picture of my character. Basically, what I’m trying to say is that this spring, I bossed my first prescribed burn. That’s right. I was burn boss at this year’s Old Man on his Back Prairie and Heritage Conservation Area (OMB) prescribed burn. No big deal.

For the uninitiated. For those who I haven’t had to stare down as I rip the drip torch from their inexperienced hands. For those lucky souls who I haven’t pushed aside as I stomp and grind a smouldering cow-patty into the ground that others feebly failed to extinguish. For those few mortals who I haven’t kicked awake at 3 a.m. to light another few hectares of grass. Well, for those folks, I will tell the rather tall-sounding tale of how I bossed that burn in the spring of 2019. 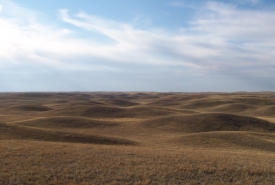 First, let’s gather around our little campfire here. Throw another couple of bundles of twisted up prairie wool on the campfire and huddle in close while I explain the Incident Command System (ICS).

You see, ICS is how folks in an emergency, or even, say, a planned prescribed burn, put together a team to pull off a tricky, or slightly dangerous, job. ICS makes sure everyone knows who’s boss, you see? For you city folks, it’s kind of like an org chart.

And of course, “org chart” is our safe word, which means I’ll stop torturing you with my attempts at old-timey talk and just do my best to tell you what our prescribed burn was actually like. There’s no way I can describe my attempt at my colleague Marla Anderson’s patent-pending pre-burn, cold yoga in layers of sweaters, full fire-proof coveralls and 20-centimetre leather boots, and still pretend I’m any kind of tough guy.

I may as well start at the beginning to explain how on God’s brown Earth we decided to burn grass at OMB. If I’m honest, it all started when I almost beat my former NCC colleague Dale Gross at a steak-eating contest during a range management tour back when we were both starving graduate students. I was just one dollop of sour cream shy of the record when . . . okay, okay, too much context.

Dale, who used to work for the Nature Conservancy of Canada’s (NCC’s) Saskatchewan Region, started his PhD to explore the impacts of grazing and fire on plants, animals and ecosystem services at OMB, a place he knows well and loves. The University of Saskatchewan-led project required patches of grass to be sampled for vegetation and soils before and after prescribed burning and to use GPS collars to compare before-burn and after-burn grazing of the patches by cows and bison. If you want to hear how you put a GPS collar on a bison, I’ll refer you to Dale himself and warn you that he reacts strongly to the mention of squeeze chutes and cordless screwdrivers.

Anyway, this all started back in 2017 by collaring some bison and cows and sampling the soils and vegetation, but though we’d hoped to get burning that first year, preparation is the better part of valour, and it didn’t happen. Actually getting the equipment and staff together to complete our first burn is worthy of so much more than a blog post. Epic songs could be written about the consultation process, and dramatic, interpretive dance will one day be performed depicting the gathering of fire-retardant clothes and gloves from around the city of Regina. Someday, I’ll chisel into granite a diagram of where task force one and task force two bravely positioned themselves to make sure the fire didn’t creep outside of its assigned area into the adjacent grass.

Meanwhile, our counterparts at Meewasin (Saskatoon’s conservation and outreach agency) have been quietly maintaining their grasslands through a mixture of grazing and burning, adjacent to millions of dollars worth of Saskatoon city houses. Environment and Climate Change Canada’s Canadian Wildlife Service (CWS) has been burning huge swaths of grassland to benefit bird habitat, and Julie Pelc and other NCC Manitoba Region staff have been using fire to beat back trembling aspen to protect tall grass prairie with modest fanfare. But never mind all those folks; this is my blog post!

Now, back to whatever thread of a story we can find. The burn is part of a larger research project, but it is also part of NCC Saskatchewan Region’s role as land managers. That was how we accomplished our first prescribed fire, and the way we went about this one as well. Dale and I had help developing our burn plan from some of our heroes at the Ministry of the Environment. We ran our monitoring protocol by CWS and Julie Pelc (I bet she has her own burn boss stories to tell), who listened in on many phone calls and gave us her perspective based on years of experience in Manitoba and with many people from agencies including Meewasin, Grasslands National Park, Saskatchewan First Nations Emergency Management, Nekaneet Cree First Nation and the Frontier Volunteer Fire Department, who offered equipment and themselves to actually do the burn. But what we didn’t have was a burn boss; the person at the top of the ICS org chart that lights the first few drips of diesel/gas mix. Our previous burn boss, Renny Grilz of Meewasin renown, was not able to attend this year’s prescribed burn, and so, reluctantly, I stepped in.