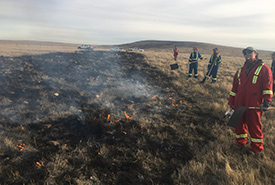 Morgan Kanak, Emily Little, Michael Burak, Dale Gross and Gabriel Foley admiring the black line we established using the tools of the trade, including flappers and a drip torch. (Photo by NCC)

This is part two of “Bossing the burn.” Click here to read part one.

Have you heard the Tragically Hip song, “Lonely End of the Rink”? I’m pretty sure it is a love song that also describes the toughest position in hockey (goalie), and I think it does a pretty good job of describing my experience as the burn boss this spring. Just like a goaltender, when everything was clicking and we were moving along, I felt like I was the member of the burn team that was farthest from the action, and it was extremely cold and lonely. That’s because, as the burn boss, I was standing on the top of a hill using a radio to direct two teams, each with at least one ignitor (the person holding a canister of diesel/gas with flaming fuel dripping out [a.k.a. a drip torch – totally safe, don’t even worry about it]), one task force leader, who was directing three people with flappers (not the dessert found in small town restaurants across Saskatchewan or someone dancing 1920s style, but long sticks with, essentially, mudflaps on the ends to smother flames . . . and to lean on when things get slow, just sayin’), and a backpack pump (20-litre water tanks that you strap to your back and aim streams of water at the base of a fire with, and incidentally probably leaks down your leg all day, which is fine if it’s hot but not great when the high is 6 Celsius), and one fire engine (in this case, a gator [a souped-up ATV with a 300-litre tank attached to a very efficient little pump forcing water though an eight-metre hose run by a driver and nozzle-head]). 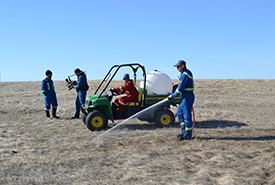 Jennifer McKillop wrangling the gator (ATV with a tank and pump on the back) and nozzle-head, and Cameron Wood, work together to wet an area adjacent to where the ignition crew will start the prescribed burn to create a black line. (Photo by NCC)

On either end of our square patch of intended burn area were the volunteer fire department and their engine in reserve in case things got out of control, a spotter sitting in the smoky end of the fire checking to see if any embers escaped the burn area (shout-out to Gabriel Foley who ate a lot of smoke without a minute of complaining), and, of course, let’s not forget our safety officer/weather guru, Morgan Kanak, who gave me regular and frequent updates on the wind speed and direction, relative humidity and news of any impending weather systems. It may have looked to the untrained eye that the burn boss wasn’t really doing any of the really frantic parts of the operation, and you would probably be right.

You see, this whole operation was really a lesson in humility for me that I haven’t quite caught up to yet and probably can’t thank my way out of (special thanks to Kylie Garchinski for doing just about everything). When we started the week, I felt like I needed to know everything, have an answer for every question, and make sure every pump was ready and every backpack was full. But as we struggled through the week and carefully created our eight-metre wide stripes of blackened grass directly up-wind from our mowed and wetted eight-metre wide guards, so that we could later let five-, 10- and sometimes even 20-metre-wide strips of flame follow the wind and burn themselves out into these guards, we as a group found out how good everyone was at their tasks. 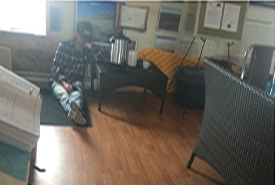 Gabriel Foley proving that the right place and time for a nap is here and now. (Photo by NCC)

The smoked-out flappers and backpack pump operator requested permission to get traded out with fresh people. The engine operators knew when to request a halt to further igniting so they could fill up their tanks. And our spotter did double duty (as did others) ferrying full bottles of diesel/gas mixture (at a completely reasonable speed, I assure you) to the ignitors as they ran out.

Sure, not everything went perfect, but with the amazing help of everyone there, we accomplished a prescribed burn in a place many people didn’t think we could.