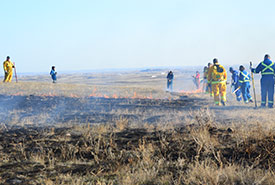 Prescribed burn at NCC's Old Man on His Back Prairie and Heritage Conservation Area, SK (Photo by NCC)

The Nature Conservancy of Canada (NCC) is committed to conserving nature in all its diversity, to create a legacy for future generations. NCC uses the latest conservation science to safeguard Canada’s lands and waters. As a part of this commitment, NCC, along with our partners at the University of Saskatchewan and Meewasin Valley Authority, conducted its first prescribed burn in Saskatchewan this past April.

Prior to European settlement and large-scale cultivation, fire was a common occurrence that, along with other forms of disturbances, helped maintain the prairies. Fire removes plant material above the ground from an area, hitting the reset button on plant growth. This levels the playing field between faster-growing and slower-growing plants. This leads to an increased diversity of both plants and animals living in a given area. 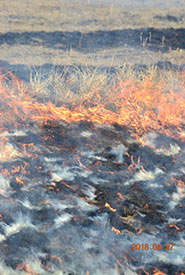 Fire removes plant material above the ground from an area. (Photo by NCC)

Increased biodiversity is created because different species have evolved to need different conditions. Many species need shorter grass to survive, while others need longer grass. Historically, prairie fires and bison grazing naturally created different grass heights, which allowed species habitat to remain constant even if it may have shifted locations. Burning an area also returns nutrients back into the soil, making it an area rich in regrowth. After a prescribed burn, the evidence of the burn will be almost invisible to an untrained eye.

Increased diversity of grasses also benefits larger grazers — like bison and pronghorn — which benefit from the different nutrients that a larger variety of plants provide. Both mammals and birds have been observed seeking out burn plots because of the nutrient-dense young plants that sprout up from the ashes.

Today, fire is still an essential tool in the proper management of grassland ecosystems. It must be carefully planned and executed to avoid the destruction of surrounding property and the delicate grassland ecosystem. Prescribed burns that are done properly, under the correct weather conditions, can also lessen the risk of serious wildfires by reducing dry grasses that could cause uncontrolled fires. 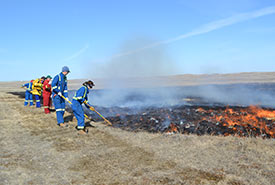 Prescribed burn in action. Only a small strip of grass is ever set on fire and it either burns itself out or is quickly smothered or extinguished with water. (Photo by NCC)

NCC’s recent prescribed burn in April was conducted in southwest Saskatchewan at our Old Man on His Back Prairie and Heritage Conservation Area (OMB) property.

Michael Burak, NCC’s program director for southwest Saskatchewan, sat down with me to talk about the recent prescribed burn.

Logan Salm (LS): Where was the prescribed burn conducted?

Michael Burak (MB): The burn took place at NCC’s OMB. OMB is over 13,000 acres (5,261 hectares) in size, so we were only burning very small portions of the property. The burn was part of a research partnership with the University of Saskatchewan. The areas we burned were within sampling plots set up during the summer of 2017, when baseline information on the vegetation community was collected so that it could be compared to the grass after the burn. The areas that we burned were chosen randomly within the larger research plots to meet the needs of the research. It turned out that of the six potential units selected to be burned in the spring, two units that were the most accessible were within a native pasture and an old, tame grass [grasses planted by humans] pasture. It will be interesting to see how the different areas respond to the burn.

LS: Why did you conduct a prescribed burn?

MB: Fire is an essential part of the prairie landscape, and OMB was long overdue for some fire. Most estimates say that the OMB landscape hasn’t had a fire in 100 years, if not longer. This is partly luck and partly due to a well-run fire department in the area.

LS: Who was on the team?

MB: Well, besides the many NCC staff from the Saskatchewan office who helped out, the project was a collaborative effort between many groups. The burn boss, the guy in charge of the whole project, was Renny Grilz from the Meewasin Valley Authority (MVA) in Saskatoon. MVA regularly conducts prescribed burns in and around the city of Saskatoon and is considered by many to be experts in this field. Also part of the project were staff and students from the University of Saskatchewan, including professor Eric Lamb and his students Dale Gross and Hannah Hilger. The Rural Municipality of Frontier Fire and Rescue crew were also on hand to make sure that not only was everything done safely, but also to learn more about prescribed burns.

LS: How do you ensure that everything stayed safe during the burn?

MB: Everything was incredibly safe. We had a very detailed burn plan, which we followed. With the help of so many excellent people, we were able to execute it perfectly. When people picture a prescribed burn, they often think that we set an entire field ablaze at a time. In reality, only a small strip of grass is ever set on fire. It either burns itself out or is quickly smothered or extinguished with water. This is a highly controlled event, with thousands of gallons of water on hand waiting to extinguish the flame in the very unlikely event that a fire becomes too large.

MB: Weather conditions are one of the most important factors when it comes to prescribed burn safety. If the conditions are too hot or windy, it is unsafe. But if the weather is too wet, it is impossible to burn. The conditions have to be perfect to burn, and so we had someone whose only job was making sure the conditions were perfect and reporting directly to the burn boss every 10 minutes or more frequently. Not only were temperature and wind speeds carefully monitored, the humidity of the air was also constantly being checked.

We spent a lot of time waiting around for the winds to settle down in the evenings so that we could burn more. As tempting as it was to get started, we never compromised safety and always waited until the winds were stable and within our prescription. This meant that we were only ever able to burn for short periods of time in the morning and evening, when the winds were at their calmest. Even though the wind was sometimes so soft you could hardly feel it, we always stuck to our plan no matter what.

LS: Were there any accidents?

MB: We were prepared for any accident, but there wasn’t a single accident or incident of any kind; we were well prepared. When you are following a burn plan and burning under the right conditions with experienced staff, your chances of accident or injury are very low.

LS: What were the results of the prescribed burn?

MB: We are still monitoring the fields to see the results, but we have already seen lots of plant growth. It is amazing to see how fast the prairie landscape bursts back into life after a burn. One of the most interesting developments that we have noticed is the contrast between the burn area that had tame grass and the area that had native grass. In the weeks immediately following the burns, the tame grass greened up right away, while the native grass was a bit slower. But since then, the native grass has definitely caught up, and after just three weeks it was looking more lush than the tame grass. This regrowth has already attracted wildlife to the burned areas, including chestnut-collared longspur (a species listed as threatened by the Committee on the Status of Endangered Wildlife in Canada) and pronghorn. It will be interesting to continue to monitor the area and see how the cattle react when they are put into those pastures.

LS: Will you conduct another prescribed burn?