Call of the wolf 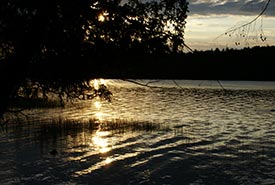 “Did you hear that?” I asked my mother.

We were lying on our backs on the rocks that sloped down toward one of Algonquin Park’s hundreds of interior lakes. It was warm for late summer, and the Perseids were putting on quite the show. The sky seemed almost alive with millions of twinkling stars, the thick filament of the Milky Way cutting across my vision. Here, far away from cities and their lights, the stars were bright enough to light the darkened forest.

I heard the sound again, just ever-so-faintly. It was not the loons that had been calling plaintively to each other throughout the long summer evening, nor the buzz of nighttime insects. This sound was more haunting, more primal than any I’d ever heard before. I turned to my mother and at the same time, we said, “wolves.”

To those who live among the mountains, pines, soaring cliffs and other empty places, hearing that distinctive howl of one of Canada’s larger canids might not seem very remarkable. Yet, to those of us more used to the screams of sirens and obnoxious honks of transport trucks, the sound of a wolf was something to marvel at.

When people have asked me why I chose to work in conservation, why I made such an abrupt educational and career shift away from Egyptology, it’s that summer night in Algonquin Park that I remember. I wanted to make sure that generations of mothers and daughters would be able to experience the same joy and wonder that my mother and I felt that night.

Fast-forward almost 10 years. This time, my mother and I were in Killarney Provincial Park in Ontario. Driving down the long road that winds southwest off the Trans-Canada Highway toward Georgian Bay, I kept my eyes glued to the tree line and the ditch by the road. I hoped to catch a glimpse of the dark shadow of a bear or the flash of white from a deer’s bounding rump.

A couple of years before, I was in the passenger seat busy with my cellphone — some social media emergency — and had missed seeing the bear cub that darted out in front of the car (far enough away that we didn’t hit it). I swore I’d never take my eyes off the road again. It was probably because of my increased vigilance that I spotted the brown and gray shape before my mother did this time around. 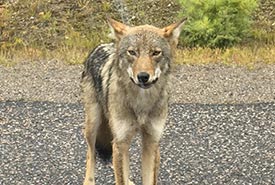 Wolf (potential hybrid), Killarney Provincial Park, ON. Photo was taken from inside a vehicle as it was safe to do so at this time. (Photo by Nicole Senyi/ NCC staff)

She’d spotted it now, too. Directly in front of us was a wolf. My mother stoped the car. The animal did not dart away; it just stood there looking at us, its gaze intense and intelligent. It was small for a wolf and its features were not pure Canis lupus; there was a coyote look to it. Words like coywolf, eastern wolf and red wolf floated into my brain. I’m no biologist, so I couldn’t fathom a guess as to the predator’s genetic origins.

The animal trotted around to the driver’s side of the car. I sighed in disappointment, and a little disgust. Clearly the wolf had suffered the effects of habituation — a process where animals associate humans with food and lose their fear of them. Like a dog begging for table scraps, this wolf expected to be fed. Much to my mother’s disappointment, I honked the horn, trying to scare it off. It gave us what seemed to me like a disgruntled look and took off into the trees.

I later was told at the park office that the wolf was indeed a wolf-coyote hybrid. I’m not sure what happened to it, but I feared the worst.

Fast-forward to the present. 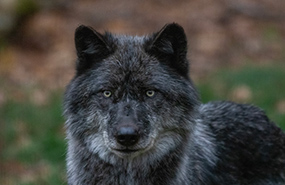 As part of a Nature Conservancy of Canada Ontario Region staff conference this October, my colleagues and I toured the Haliburton Forest and Wild Life Reserve’s wolf education centre. This temple of canid worship is filled with art, interpretive displays and, of course, wolves. A pack of about six animals calls the centre home. The wolves, while fed, are not subjected to human contact; the pack has the run of a six-hectare (15-acre) fenced area and are viewed through one-way glass.

Coming into the windowed viewing area, I was under no illusions as to the ignorance of the pack to our presence. They all stood at attention, gazing directly at us. Through their superior senses of smell and hearing, they were well aware of our presence. They seemed not at all concerned that 40-odd humans had just invaded their territory.

As a special treat, for us and the wolves, staff at the centre tossed out several dead beavers and a deer carcass — products of local roadkill. We observed the intricacies of pack politics. Contrary to my understanding, the wolves were led not by an alpha male, but by an alpha female. She had the first and best pick of the meal, followed by her mate, the alpha male. 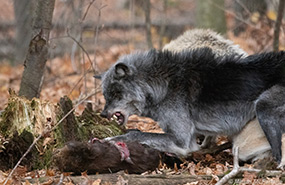 Wolf and its kill (Photo by Mhairi McFarlane/NCC staff)

As lunch was served, the alpha female took one of the beavers — the wolves’  favourite due to the thick layer of fat around the rodent — deeper into the forest. The other wolves dug into the deer. With their sharp teeth, they pulled back the hide and skin to get at the meat, their muzzles stained pink against their light fur. They jostled for position, not viciously as Hollywood and horror stories would have us believe, but systematically. The more senior wolves bared their teeth and nipped at the younger wolves, who then tucked their tails and deferred to pack hierarchy. It was a seamless system.

I spent a long time watching the wolves, like some sort of BBC documentary. Yet, the entire time I felt uneasy, as if I was intruding on something private and personal.

The original wolves were acquired from an artist years ago, back before we realized that it was wrong to keep wild animals for pleasure. The wolves today are their descendants. They are kept as wild as possible. The centre provides invaluable educational experiences — connecting humans to wildlife in a unique way. The passion and depth of knowledge of the staff was outstanding. I know that I would never have had the opportunity to see wolves up close like this in the wild.

Yet, even as I treasure the experience to see wolves so close, I think back nostalgically to the first haunting notes of the howl of that wolf in Algonquin Park years ago. Sometimes the mysteries of nature are better left as just that: mysteries.

The wolf is one of 19 species featured in NCC’s gift giving campaign: Gifts of Canadian Nature. To learn more and to give the gift of conservation this holiday season, click here. 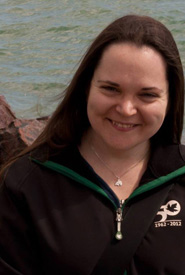 Nicole Senyi is the communications manager for NCC's Ontario region.