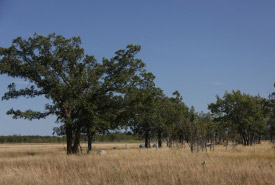 This past summer, the tall grass prairie of Stuartburn, Manitoba, was filled with the sounds of footsteps and laughter. Stephanie Murray, a former communications and engagement intern with the Nature Conservancy of Canada’s (NCC’s) Manitoba Region, who now works as an assistant conservation biologist, could be seen leading a group of children on a nature walk on the Prairies.

As a former communications intern with NCC myself, it is rare for an intern working in communications and engagement to be spending most of their working days in the field, but Stephanie used a hands-on communications approach to engage locals. Stephanie and Tyra Bodz, a summer student working for the Rural Municipality of Stuartburn, organized a series of summer day camps to connect the local children of Stuartburn with nature, especially considering the ecosystems in their region. 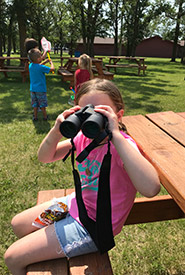 The Tall Grass Prairie Natural Area, located in Stuartburn, turned out to be the perfect area to organize these day camps. (Photo by NCC)

The Tall Grass Prairie Natural Area turned out to be the perfect area in which to organize these day camps. It has incredibly diverse habitats and is home to some of Canada’s most endangered species, such as Poweshiek skipperling.

NCC has been actively managing this ecosystem since 1994 when it entered into a memorandum of understanding with the Manitoba Tall Grass Prairie Preserve Management Committee. Collaborating with the Regional Municipality of Stuartburn, NCC is engaging locals and increasing their awareness of the benefits of the tall grass prairies so that they can have a continued sense of pride for their home.

Tyra comes from Stuartburn herself. She has a passion for improving the well-being of the locals in her community and their connections with nature.

“Growing up in this community, you may not know how special this place really is,” explained Tyra. She not only wanted to engage local children with the tall grass prairie, but also with each other.

Filling the camp participants’ days with arts and crafts, play time and nature walks, Stephanie and Tyra incorporated the diversity of species found in the tall grass prairie into their daily activities. From mammals to insects, they showcased every aspect of local biodiversity to the campers through games and nature walks. 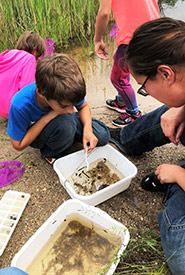 Local biologist Dorthea Gregoire joined them in helping the campers identify local species. Dorthea encouraged the campers to skim a nearby pond for interesting aquatic insect species, which she would then identify.

Though the activities all had the goal of getting the campers to appreciate the biodiversity here, Stephanie, who grew up in an urban area, noticed the amount of knowledge these children had about wildlife just from growing up in Stuartburn.

“I recognized that a lot of the kids were able to identify monarch caterpillars and understood the importance of milkweed,” said Stephanie. “They identified wood ticks and poison ivy as well.”

While the campers connected with each other through play, physical activity and species identification, Stephanie and Tyra both saw the potential in working with local communities to conserve ecosystems in Canada. 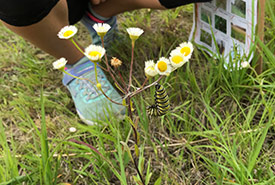 I recognized that a lot of the kids were able to identify monarch caterpillars and understood the importance of milkweed. (Photo by NCC)

“It’s important for NCC to work with rural municipalities. so that we, as a large-scale conservation organization, understand what’s important to the communities near our natural areas,” said Stephanie.

In the case of this tall grass prairie summer day camp, the children left with big smiles and an appreciation for their local flora and fauna.

“Many people look around the world for examples of endangered ecosystems, when the ecosystems that need the most help are right at home,” explained Stephanie when I asked her if this day camp initiative has changed her perspective as a conservationist.

“When NCC and locals come together, we are making a better future for the children who come to play and learn, which benefits all of Manitoba,” said Stephanie, reminiscing about the sunny days on the Prairies with the campers. “You never know who we might inspire and who might be the next great biologist to save the world.”