Can you hear me now? Using remote technology to record birds and other wildlife 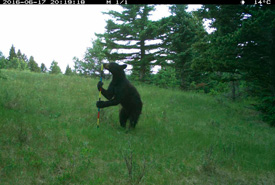 In various Nature Conservancy of Canada (NCC) properties across Alberta, the secret lives of wildlife are being discovered using camera traps, sound recording units and other technology. Scientists are generating new and valuable data on wildlife and their behaviour, which may be among our best tools for better understanding the conservation needs of species at risk.

To capture the sights and sounds of wildlife on NCC’s properties in Alberta, Craig Harding, NCC’s manager of conservation science and planning, and his team have been setting up camera traps and autonomous recording units (ARUs). 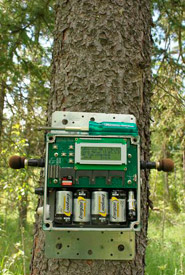 An ARU mounted on tree. (Photo by NCC)

Harding and his team aren’t working alone, however. The Alberta Biodiversity Monitoring Institute (ABMI) and the University of Alberta’s Bioacoustic Unit are the driving organization behind a project to capture data from across Alberta, using a standardized approach to biodiversity monitoring. They are achieving this by using new technology and partnering with organizations like NCC to collect the data.

While camera traps are remotely activated cameras typically triggered by a motion sensor or an infrared sensor, an ARU, like the Wildlife Acoustics-brand SM4, SM3 and SM2 units used by ABMI, are sophisticated audio recording devices. “We set them up in a box and program them to come on however many times we want, for as long as we want,” says Monica Kohler, regulatory efficiencies unit manager for ABMI. “For example, during the breeding bird season, we can set them to come on in the morning when most birds are singing. Most frogs call in the evening, so we can set the units to start recording at dusk.”

Kohler explains that ARUs and camera traps have changed the way conservation scientists monitor wildlife habitats. “We collect data from a network of different organizations using ARUs for their own purposes. That’s where NCC fits in — it contributes data so we can understand on a province-wide scale how species are changing over time.” Typically, ARU data is used for bird and frog observations, while camera traps are used to track mammals. 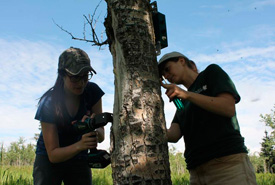 Camera traps being set up. (Photo by NCC)

Harding says ARUs deployed by NCC during 2016 provided an incredible, audible view of bird life. “Some birds will fall silent when anyone is there, so using technologies that allow you to listen to the sounds of nature without physically being there provides you with information you can’t get any other way.”

The information gained from ARU recordings also offers a good baseline assessment, according to Harding. “We get a huge collection of birdsong and some frog identification from the data. While we aren’t trying to target specific species, the analysis of the data by ABMI provides us with a baseline inventory of breeding birds. This information can help to guide our management of the property, and to monitor the health of the habitat.

According to Harding, camera traps are used to observe animals in the wild without interference. “This method of gathering data allows animals to be animals. If people are there, they will affect the behaviour of the wildlife. With a camera trap in a strategic location, we can observe animals in their natural habitat. Typically, we capture medium to large mammals in photographs; small animals can be too small to be recorded unless they are close to the camera traps.”

For its part, ABMI uses high-end Reconyx PC900 Professional Covert Cameras for optimal image capture. Since these cameras also work at night, nocturnal wildlife, not often seen during the daytime, can often be observed. “We’ve seen lynx, cougar, fishers, badgers. In the past, we may have seen scat or scratch marks from these animals, but that was all. With camera traps we can better assess the health of the animal and count the number of individuals,” says Harding.

Acoustic data gathered by NCC and ABMI using ARUs is analyzed by the Bioacoustic Unit at the University of Alberta, by a team led by Erin Bayne. It is then returned to ABMI for use in modelling. NCC also receives an annual report of all species identified using these methods. Harding says, “Our role is data collection. ABMI’s is mostly data analysis and mapping.” For NCC staff, part of the reward and excitement is found when unexpected or seldom-seen species are observed. 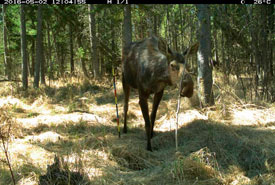 Camera trap image of an elk (Photo by NCC)

About a decade ago, the NCC team found evidence of what was suspected to be American badgers on the Collins property. Recently, a camera trap confirmed the badgers’ continuing presence. It was an exciting observation. “We now have photographic confirmation that badgers are present on that property,” says Harding. The 2016 data also showed elk much further east on the Collins property; a new observation for NCC at that location.

When camera traps and ARUs capture imagery or sounds of at risk-species on any NCC property, NCC staff are able to adjust their conservation activities to provide appropriate protection. For example, grazing programs can be implemented to help support some species. Or, on properties where hay is cut and baled, NCC could recommend delaying hay collection during the breeding season of the identified species.

Data analysis: the biggest hurdle with camera traps and ARUs

The sheer volume of data collected from ARUs and camera traps that needs to be sorted and analyzed is a major challenge that falls largely to Erin Bayne of the University of Alberta’s Bioacoustic Unit, with support from ABMI. For camera images, ABMI uses automated data processing technology that differentiates vegetation from animal pictures, and helps assist human analysis. From there, data is also run through “AutoMoo,” a program that removes pictures of cows since they are not animals of interest for ABMI, and there are many of them in Alberta that are caught on camera traps.

Soon, a program called Wildtrax will be used to supplement ABMI and the University of Alberta’s Bioacoustic Unit’s resources. Kohler explains that Wildtrax can help address the gargantuan task of pulling out viable images and sound files from the data. “Anyone who wants to use cameras or ARUs can upload their data and store it within Wildtrax. With audio recordings, it shows you a spectrogram of the sound, so you can watch visuals at the same time and quickly tag a species. The same is true with the image files. It has batch tagging software, so if you have many pictures of one particular animal, you can tag them all at the same time,” says Kohler.

The first release of Wildtrax is now underway, with testing being undertaken by partners such as NCC. When fully ready, Wildtrax will be made available to the public, so that interested people can tag pictures and contribute to data analysis efforts. This crowdsourcing of the large task of data analysis will give the public a chance to get involved in the work of protecting species at risk.

This post originally appeared on the Nature Conservancy of Canada's Places Worth Protecting microsite and was produced with the support of Randall Anthony Communications Inc.