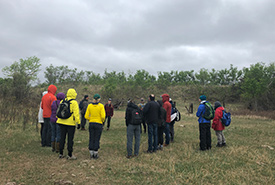 Twenty-four people came out to NCC's Dundurn property in Saskatchewan to learn about citizen science and land conservation. (Photo by NCC)

If you see a group of hikers with their eyes glued to their phones, do not despair. They are likely just using the citizen science app iNaturalist to identify species; you can literally smell the roses and then use an app to find out what kind of rose you’re smelling.

This spring, I had the chance to spend a rainy Saturday morning on the Nature Conservancy of Canada’s (NCC’s) Dundurn property in Saskatchewan. Twenty-four people braved the weather to come out and walk the land while NCC staff talked a bit about citizen science and land conservation.

I saw first-hand how citizen science builds community. Just a few minutes into our walk, strangers were gathered around a butterfly resting on a three-flowered avens. They pulled up their iNaturalist apps, opened their field guides and spent a good 10 minutes just huddled together, having an open discussion about the butterfly and counting the black dots on its wings. 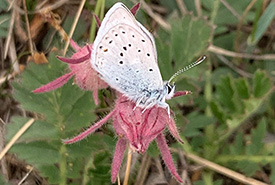 Just a few minutes into our walk, strangers were gathered around a butterfly resting on a three-flowered avens. (Photo by NCC)

When Kayla Burak, NCC’s engagement manager in Saskatchewan, was talking to the group about iNaturalist, she described it as a community within itself. Not only do citizen science apps like iNaturalist help you connect to those around you, they also mimic the in-person experience. You might have zero experience with species identification and still take pictures of species you want to identify and upload them to iNaturalist. Then, you can have discussions with people around the world about what species it could be. Apps like eBird invite you into similar communities of citizen scientists and professionals.

At NCC, we know that community-building is an important part of conservation. When you come out to a bioblitz or use eBird or iNaturalist to log the species you encounter on NCC properties, you are not just a citizen scientist, you are a citizen conservationist.

In a presentation at the NatureCity Festival in Saskatoon that I attended the night before going to the Dundurn property, Elan Marsall, one of NCC's interns in Saskatchewan, described citizen science as “public engagement in the science community.” There’s that word again: community — it’s a vital part of what we do.

I have heard many debates about whether smartphones and their apps hurt our communities or help us find new communities and reconnect with old. I think it’s a bit of both.

What I know for sure is that apps like iNaturalist build a new kind of community: one built upon a mutual love for nature and concern for our natural areas, which is important to conservation organizations like NCC. 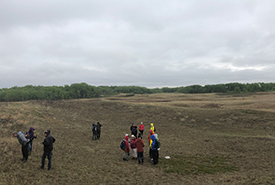 Citizen science is “public engagement in the science community.” (Photo by NCC)

Toward the end of our walk, we came across what other staff were calling “stabilized sand dunes.” To me, it just looked like native grassland with a few more hills than we’re used to in Saskatchewan. That day, I learned that a stabilized sand dune is a sand dune covered in vegetation, which stabilizes it. These plant communities protect the dunes from wind and other elements that threaten to sweep them away. Our local communities of citizen scientists and conservationists are like the stabilizing vegetation that helps protect the land.

In this digital age, most citizens have access to scientific knowledge like never before. With resources like iNaturalist, eBird, Neighbourhood Bat Watch, the Saskatchewan Breeding Bird Atlas, Nocturnal Owl Survey, Nest Watch and Property Watch, you can directly contribute to our communal scientific knowledge. By doing so, you become a member of the conservation community.

Sixteen-year-old Greta Thunberg of Sweden, a great citizen scientist and climate change activist, stood before representatives from the 28 European Union countries last year and told them, “Unite behind the science.” I invite you to do the same.

Come out to a Conservation Volunteers event, record species with an app, adopt a property and join our conservation community.