Conservation beyond the cubicle 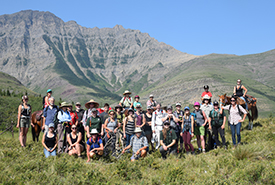 Conservation Volunteers at the Last Stand at Blind Canyon event. (Photo by NCC)

Despite working for a conservation organization, I spend my workdays in an office, surrounded by cubicle walls, eyes glued to my computer screen and my fingers happily tapping away at my keyboard.

So when an opportunity to join one of the Nature Conservancy of Canada’s (NCC’s) Conservation Volunteers (CV) events came up, I jumped at the chance. While scrolling through the list of CV events in Alberta, “Last Stand at Blind Canyon” caught my attention. It was taking place in the Waterton Park Front area, once of my favourite parts of Canada, it involved ripping up invasive burdock (can you say cathartic?) and it required some physical effort to get to the area, so I’d get my workout in. Sign me up! 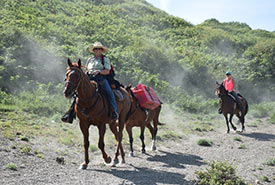 A pack horse was brought in to carry out the bags of burdock. (Photo by NCC)

It was a scorcher the day that 34 of us — and a number of horses — met up at the Twin Butte General Store (Psst. Looking for some outstanding Mexican food? Check this place out.). Along with the 15 CVs and NCC staff, standing in the meet-up circle were Wendy Ryan of the Castle Crown Wilderness Coalition and a few folks and volunteers from Old Man Watershed Council and the Shell weed crew. The Blind Canyon is conserved in partnership with the Alberta Conservation Association (ACA) and Alberta Fish and Games Association (AFGA). NCC, ACA and AFGA acquired the Blind Canyon property in 2009.

I recognized a number of the CVs from an event I attended last year. Most live in the Pincher Creek and Lethbridge area and this was not their first (or second or third) NCC rodeo. These are dedicated volunteers. Their tireless efforts to lend a hand in protecting our country’s natural habitats are remarkable. So, thank you.

We arrived at the trailhead after a short drive, topped up our water bottles, slapped on sunscreen and bug dope and set off on our 2.5-kilometre hike into Blind Canyon. The horses led the way up and over a sun-soaked bald ridge, through an aspen forest and across a small stream. We passed wild raspberry and Saskatoon berry patches (Ok, we didn’t really pass by; we stopped to eat some first.), and wild bergamot, sticky purple geranium, fleabane lined the trail.

Once we reached the remains of an old homestead, everyone headed to the shade of the trees to wolf down lunch while Wendy provided a history lesson on the Blind Canyon property. I have to admit that with the heat and a satisfied belly, it was tough to keep my eyes open, but I persevered.

Fully fueled, we broke into groups to take on the burdock. Burdock is an invasive plant with a two-year growth cycle. In its second year of growth, the plant sports seed heads that resemble burrs and that stick like Velcro to animals (and humans), eventually getting dispersed to other areas and starting the cycle over again. Last summer, NCC staff and CVs visited Blind Canyon in their first attempt at ridding the natural area of burdock. Based on what we saw this year, they did a darn fine job as there was very little second-year growth present. 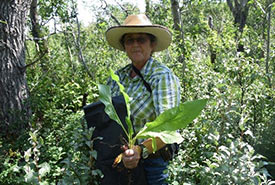 Armed with a shovel (to dig down deep to the plant’s taproot) and clippers, I joined the group that was seeking to destroy burdock over by the stream, which was, thankfully, in the shade.

Despite the heat, the volunteers worked diligently and their enthusiasm never waned. And after a couple of hours of focused digging, snipping and bagging, it’s safe to say that you’d be hard-pressed to find a single burdock plant left at the homestead site. The plan is to come back again next summer to continue purging any remains of this pesky plant. 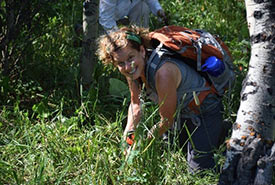 Getting down to uproot invasive burdock on Blind Canyon, AB (Photo by NCC)

As the manager of editorial services at NCC, I spend the vast majority of my day reading about NCC’s work. But nothing beats having the chance to spend the day in nature and seeing the results of our conservation, on the ground.

But next time, could it please be a little cooler?