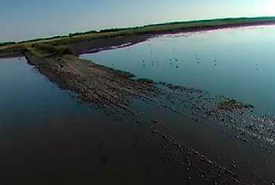 The team at M3 Aerial Productions and I recently had the privilege of doing some drone work for the Nature Conservancy of Canada (NCC). The job involved using a drone, equipped with a 360-degree video camera, to document NCC’s Oak Lake Wetlands Natural Area in Manitoba. This was an unconventional project for us and, as such, was a highlight of the year. What better way to provide the ultimate “feel-like-you’re-there” experience than through virtual reality?

The day started at around 5:45 a.m., as we wanted to arrive on-site in time to record the sun peeking over the horizon, bathing the wetland grasses in an early-morning, golden sheen. We drove up the road as far as we could, until we reached a point where water flowed over the gravel road toward a southern outlet of the lake. Birds enjoyed their morning breakfast of bugs and minnows, as they crowded around the flowing water.

As we set everything up, we felt watchful eyes of passersby all around us, wondering what this contraption we were about to raise into the air could be. “The Home Point has been set,” voiced a fellow team member through the remote control. The Home Point tells us if something goes wrong during flight, and if the radio signal is lost, the drone will come back to our location automatically.

Suddenly, a splash erupted near the lake shore — a northern pike had ambushed a water beetle on the water’s surface.

“I guess that’s our cue to launch,” I said to Josh Dillabough, natural area coordinator at NCC and my guide for the day. “And up we go!”

We flew the drone around for a few hours, catching the different stages of light, as the sun angled towards its zenith. The video (below) speaks for itself. It’s quite difficult to describe in words the beauty of the imagery we collected that morning. A peaceful and serene spot, the water looked like a sheet of glass — with barely a trickle of wind — rippling only when the waterfowl took off or landed or from the downdraft of the drone’s propellers. It was truly a treat to be there!

We scooted across the lake in a shallow-bottomed aluminum boat to “The Island” (which is actually a peninsula), a place where humans rarely have the privilege of visiting in person. It was covered in a mat of bulrushes and other marshy vegetation, and the only way I could stand without sinking in the mud was by standing on a clump of bulrush roots. We were able to successfully launch the drone, and the captured results — like the day itself — were amazing!

Check out the footage captured by Matthew and the M3 Aerial Productions team below. Note: You can watch the video either on a desktop or in the Vimeo app on a smartphone. If watching on a desktop, you can click the screen and move in any direction to change the view perspective. If watching on a smartphone, simply move the phone around you in any direction to look wherever you want. 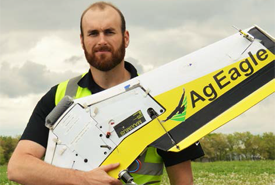