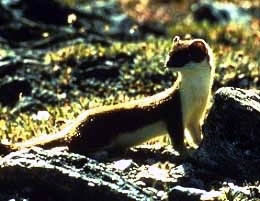 It was a winter afternoon, warmed by the brightness of the sun, as I sauntered along the park’s walking trail. The air was crisp, refreshing and invigorating. I felt relaxed and my spirits were buoyed by the peace and tranquility of the surrounding environment. The chickadees flitted amongst the trees and underbrush, where hidden sunflower seedheads had lovingly been hung by community gardeners.

The tat-a-tat of a woodpecker could be heard now and again. The intermittent caw of a crow rang forth. The cry of a blue jay pierced through the quiet.

I was hopeful that I might catch a glimpse of nature behaving instinctively. So as I walked, my eyes perused the treetops, the branches and the dense underbrush. At the mid-point of the trail, I was losing hope but decided to stop awhile at the lookout.

With the sun warming my back, I scanned the far banks. As I stood absorbing the serenity, I caught a rustle in the underbrush to my left. I jerked my head and caught a glimpse of a small furry white tail adorned with a black tip as it slipped under the lookout.

Beneath the lookout, the rustling sounds spoke of a frantic search in progress. As I slowly and quietly pivoted around on one hel, the thought struck: it must be an ermine (a member of the weasel family).

I flashed back to when I was three, when returning home late one night, we discovered our dog, Pup, in a fight for his life. He was facing off with a weasel on the house’s back step.
My parents were anxious as they debated the deadly swiftness of the weasel versus Pup’s hunting skills. My brother and I begged Dad to help Pup. Dad chose not to interfere, fearful of distracting Pup, which could result in the dog getting seriously injured.

As the four of us sat in the truck, all eyes were fixated on the battle. Each adversary’s eyes intensely monitored the other's movements as they twisted and turned, quickly thrusting their mouths forward, then followed by fast hops sideways and backwards. Like a boxing match between two fairly matched opponents, the battle unfolded over what seemed like a long time.

Pup, however, ended the match with a powerful snap of his boxer jaws.

It was at this point in my reminiscing that I caught sight of a little mouse dashing out from under the lookout, across the snow. Faster than a cop could say, “Spread 'em,” that mouse spread his four legs out and plastered his belly and neck against the base of a white poplar tree. With his eyes turned skyward, one got the impression that he was beseeching the gods to protect him.

Before I could inhale, I heard movement beneath the lookout, under my feet. Like a shot the ermine pelted down the little path towards the frozen pond. Half way down the bank, he abruptly stopped, realizing his prize was gone. With a "Where’d it go?" attitude, he surveyed the terrain…To the left; ah, nope… To the right; ah, nope.

With a quick hop he twisted around. His bewildered face spoke volumes. His nose sniffing the air, he slowly started retracing his steps.

Much to my surprise, the mouse raced across the path, in front of the ermine. Poor little guy must have been a novice at Hide-n-Seek. As the mouse arrived at the base of another white poplar, I saw the ermine pounce and heard one final squeak. With reward in mouth the predator proudly strutted down the bank.

At the pond’s edge, I could hear the ermine rustling through the frozen cattails. Finally satisfied, I heard his claws digging. Having cached his prize, he smugly headed back up the path.

As his eyes met mine, OMG!!! His body became a statue, terror spread across his face. A panic attack surged him back to his cache. A split second of agitated digging and then with his prize possession, he dashed past me across the frozen pond. I guess he didn’t understand that I was only interested in this experience and not his prize.