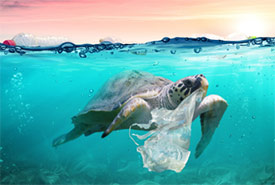 A turtle swimming with plastic (Photo by Unsplash)

Plastic pollution has become a part of the food chain in our waterways. According to Plastic Oceans, more than eight million tonnes of plastic waste is dumped into our oceans annually. As a result, one in three species of marine mammals become entangled in our trash, and over 90 per cent of seabirds ingest it.

And while much attention is centred on the impact that plastic is having on our oceans and marine life, it also affects land-based biodiversity. Microplastics are ending up in freshwater systems and polluting soil and sediment. In addition, chlorinated plastics release harmful chemicals that can pollute our drinking water, according to the UN Environment Programme.

As a result of these grim facts, people are becoming more aware of how they are personally contributing to the mounds of plastic clogging up our planet. Over the past few years, we have seen a major shift in attitude toward plastic. This change became more apparent after a two-minute Blue Planet II segment aired in the U.K. in which a scientist sorts through the plastic waste found around an albatross’s nest. Fueled by a myriad of emotional responses, this cultural shift is revealing itself through single-use plastic bans, the opening of zero-waste shops and beach cleanups.

Unlike the many transformative changes needed to tackle the climate crisis, addressing plastic waste is something that individuals and communities can identify with and ultimately tackle in their day-to-day lives. Making simple changes like carrying reusable shopping bags, buying in bulk with reusable containers or carrying a travel mug are fairly easy. Though small in the grand scheme of things, these behavioural changes can cause a ripple effect, especially if they influence food manufacturers and grocery stores. These individual actions, however, must be paired with a larger system overhaul. For example, cotton produce bags are less effective if everything is already wrapped in plastic at the grocery store. The blue box recycling program introduced in the 1980s was enthusiastically embraced by Canadians. However, it actually increased waste, as industry was allowed to use cheaper single-use plastics in exchange for partially subsidizing the program, according to the Walrus.

With mounting global pressure and revelations around our waste export practices, 2019 was a very eye-opening year for many Canadians. After discovering that less than 10 per cent of plastic waste is actually recycled, with much of it ending up in developing countries, many people are calling for major improvements to our recycling systems.

In response, the Canadian Federal Government announced plans for a nation-wide ban on single-use plastics to take effect as early as 2021. As part of a larger plastic pollution strategy, this swift ban will likely also include plastic bags, cotton swabs, stir sticks, cutlery, plates and products made from expanded polystyrene. Though little detail has been released, the plan is expected to follow the European Union’s model. It will also include plans for shifting recycling responsibilities over to manufacturers and companies selling these products.

On the other side of the globe, China recently announced its plan to ban non-biodegradable plastic bags and reduce single-use plastics by 2022. This is pretty key for tackling plastic pollution; however, transforming our plastic packaging systems is no small feat. It’s an incredibly complicated task. But the good news is that there is a lot of innovation taking place.