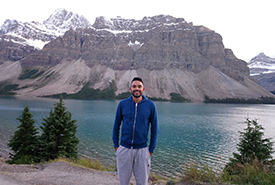 Last September I went on a week-long road trip through Alberta with my mom. We flew to Edmonton and then drove past wilderness to Jasper, Banff and Calgary. This was my first time visiting this part of Canada, and I still can’t get over its beauty.

Our first destination was Jasper National Park, the largest national park in the Canadian Rockies. The drive along the Icefields Parkway, the highway that joins this park to Banff National Park, was absolutely breathtaking. In fact, it’s ranked as one of the top 10 most scenic drives in the world.

On either side of the road you can see snow-capped mountains, cascading waterfalls, towering conifers and turquoise rivers. We made several stops to admire and take photos of the jaw-dropping views. During a couple of these stops, we saw wildlife that we had never seen before, including ravens and elk.

In addition to these short stops, we also stopped to explore some well-known points of interest. The first was Maligne Canyon, a 50-metre deep canyon with waterfalls, underground stream outlets and lush vegetation. We then visited Athabasca Falls, a 23-metre high waterfall — one of the most powerful in all of Canada’s mountain national parks. Finally, we stopped in the Columbia Icefields area and at the Athabasca Glacier, North America’s most-visited glacier. There, I trekked up a steep, rocky hill to get as close as possible to it. We then continued along the Icefields Parkway toward the world-famous Lake Louise. 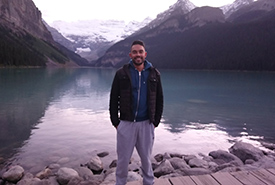 Me at Lake Louise during the evening (Photo by Tazim Hunter)

Because we made so many stops along the way to take in the stunning scenery, we didn’t arrive at Lake Louise until it was almost dark. While we could see the lake’s renowned turquoise colour, I wished we had seen it during the day with the sun shining on it. After Lake Louise, we continued on to Banff. 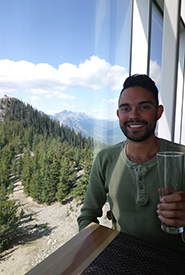 After an eventful day of driving through Jasper National Park and visiting Lake Louise, we arrived in Banff, a cute town surrounded by stunning mountains. The next morning, we took a scenic gondola ride to the summit of Sulphur Mountain, where we walked along an interpretive boardwalk to Cosmic Ray Station, a former meteorological observatory, and Sanson’s Peak.

The boardwalk provided spectacular views of Banff, the Bow Valley, mountain ranges and turquoise rivers. Following the walk, we dined at a restaurant on the summit of Sulphur Mountain to further enjoy the scenery. Later that day, we took another scenic drive through Banff National Park to Calgary. 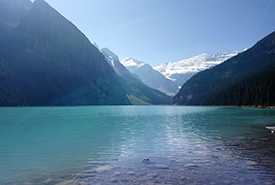 We arrived in Calgary that night. Rather than explore the city the next day, we decided to return to Lake Louise to see it in daylight. The drive from Calgary to Lake Louise was so beautiful that we didn’t mind doing it again.

When we arrived at Lake Louise, the beautiful turquoise colour was even more pronounced with the sun beaming down on the lake. We spent a few hours walking around the lake, admiring the magnificent views and taking photos. We then returned to Calgary and explored the city’s downtown in the evening.

Overall, I had a fantastic time exploring Alberta’s awe-inspiring nature. There’s still so much more to see and do in this gorgeous part of the country. This trip gave me an even better appreciation for Canada’s beauty. If you’re a nature lover like me, I’d strongly recommend visiting this area.