For the love of trees: A look at the NCC Magazine Fall 2016 issue 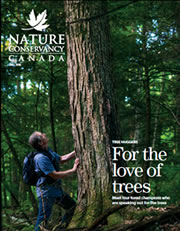 Do I have to be a tree hugger to love trees? I hope not. I always worry that while embracing a tree I will end up with some sticky, sappy stuff on my clothes. Still, I like trees, although you might say I’m a late bloomer in my appreciation for our woody friends. 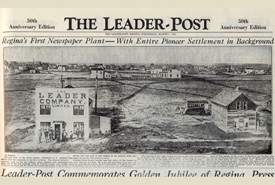 50th anniversary edition of the Regina Leader-Post newspaper, showing what Regina looked like in 1886.

You see, growing up in Ontario I took trees for granted. They were pretty much everywhere. However, when I transplanted myself to Regina, Saskatchewan, one of the first things I heard — told with bursting civic pride — was that there were more trees than people in Regina, and every one had been human planted. (The trees; not the people.) Later, I learned that city council — noticing a tree deficit on the landscape — had decreed that each new residential lot would be furnished with a tree, at taxpayer’s expense. Although these trees began life as deciduous versions of Charlie Brown’s spindly Christmas tree, most of them have grown to be graceful adornments on the front lawns of Regina’s more mature neighbourhoods. On some streets, elms form a graceful wooden arch over the roadway, helping to mellow the straight lines and sharp angles of the urban environment.

All of this is a lead-in to the theme of the latest issue of the Nature Conservancy of Canada’s (NCC’s) quarterly magazine, which is about trees, and profiles four “forest champions” who speak out for trees near their homes in Ontario, New Brunswick and British Columbia. There is also an article about the boreal felt lichen, found in parts of Atlantic Canada, which is threatened with extinction because it lacks the charisma of a cuddly bear cub or penguin. Another article provides thumbnail descriptions of Canada’s eight (who knew there were eight?) forest regions. Other items include an NCC conservation assistant’s musings on naming individual trees in a pocket of black ash trees in Newfoundland, and an Alberta couple’s donation of a biologically rich area — now the Coyote Lake Conservation Area — in southcentral Alberta. 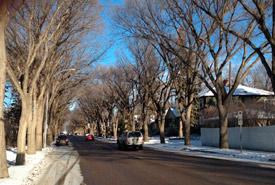 Saskatchewan’s own Hayley Wickenheiser shares with readers what she totes in her backpack when she ventures out on the trail, and TD Bank’s chief conservation officer describes how a conversation about environmental sustainability caused her to join the banking world, with the goal of embedding an environmental perspective into TD Bank’s DNA.

The back cover features comments from three NCC supporters, including nine-year-old Natalie Posner, whose favourite tree when she was little was named Ashley. (An ash tree, of course. Keep those groaners coming, Natalie!)

In the middle of the magazine, you’ll find more stories about people connecting with nature, and how you can donate to support the work of NCC. And, if you do donate a certain amount, you will receive your very own copy of the magazine, which is created and printed using an array of environmentally responsible processes. Enjoy.