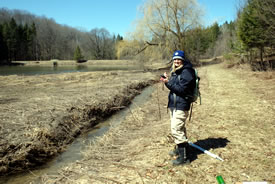 I was 21 years old, and I was going to save the world, starting with one particular forest.

In 2004, during my third year of an undergrad degree at the University of Guelph, I took a course called "Problem-solving in Environmental Biology." My six classmates and I each had to solve an environmental problem and present our solution to the group and the two teacher’s assistants for a terrifying 45 minutes, followed by an intense Q&A. 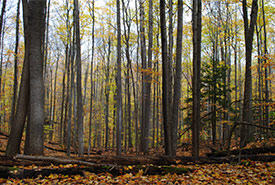 I started to look near where my parents lived (north of Toronto) for a natural area where there was an important problem I could solve. I remember being alarmed when I found that there were very few significant tracts of natural tree cover in the Greater Toronto Area, so when I stumbled across a web article about the Happy Valley Forest (HVF) and the conservation needed there to protect the red-shouldered hawk by “some group” called the Nature Conservancy of Canada (NCC), I was sold. I borrowed inspiration from an article about NCC's work in HVF, and set out to solve the problem myself.

After learning about NCC in 2004 while researching my project, I had fondly nicknamed it "my dream organization." I couldn't believe you could do something as fun and rewarding as conservation for a living.

Fast-forward to 2007, in my first week of work at NCC, when I was handed a printed copy of the recently written Happy Valley Forest natural area conservation plan. I think I actually laughed out loud and felt that things had really come full circle! Little did I know… 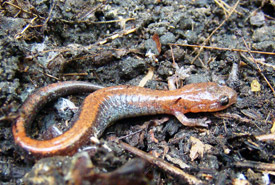 In 2004, I had big plans. For my presentation, I had named myself a senior consultant of a made-up environmental consulting firm, and I was going to save the entire HVF by buying it. My budget outlined some interesting plans, including a rock bottom price to secure land in the GTA, and fencing the whole conservation area once purchased. I've since learned that generous individuals will actually donate their properties to conservation organizations, and that fences are not always needed in the place of good communication and occasional signage.

Fast-forward again to the present, when I was recently told by NCC's Ontario Region upper management that we were realigning our sub-regional boundaries and my territory would now include the HVF. As program director, my job is to oversee the property’s stewardship program, work with key partners and acquire significant pieces of land to help achieve NCC's conservation goals. 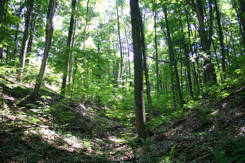 I've spent some time this year (re)acquainting myself with this amazing place, walking up and down its rolling hills under the future of old-growth deciduous trees. I'm grateful the red-shouldered hawk has found its way off of the endangered species list, that HVF’s former program director Mark Stabb successfully helped secure hundreds of acres of the forest before handing it over to me and that I have a chance to get back to solving problems in the Happy Valley Forest, where my passion for conservation began.