Five facts about grizzly bears that will surprise you

Perhaps no other animal symbolizes the stunning beauty of the Canadian wilderness as much as the grizzly bear. A type of brown bear, grizzly bears occur in the wilderness of western and northern Canada. The species' scientific name, Ursus horribilis, means “terrifying bear.” However, although they won’t shy away from protecting their food or their young, grizzly bears are typically peaceful creatures. They also act as an important umbrella species for the rest of the ecosystem, meaning that conserving habitat for grizzly bears also benefits a whole suite of other species that share their habitat.

Explore their unique and wild world with these five surprising grizzly bear facts:

As grizzly bears in Alaska and Canada move north in response to climate change, they increasingly come into contact with polar bears located on coastlines. Because the two species are very close genetically, males of both species are attracted to females of both species and sometimes mate with them. This results in hybrids, which are aptly known as “prizzly bears,” “grolar bears” or nanulak. The term nanulak is a combination of the Inuit names for polar bear (nanuk) and grizzly bear (aklak).

While the hybrids are interesting and unique, scientists note that it will be hundreds of generations before there is officially a new species of bear.

2. The hump on a grizzly bear’s back is a huge muscle 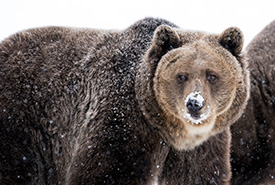 One of the most identifiable features of a grizzly bear is the hump on its back. The hump is actually a large muscle that the bear uses to power its front legs. Grizzly bears need strong forelimbs. That's because, more than any other type of bear, they love to dig in the dirt and tear apart rotten logs in search of plant bulbs, insects, roots and grubs. The hump also allows them the needed strength to dig out of winter dens, which are typically in rocky, steep mountainous terrain. The hump is also an easy way of distinguishing a black bear from a grizzly bear, as black bears don’t have a hump.

Contrary to common belief, bears do not hibernate. Indeed, while bears slow down during the winter, they are not true hibernators like woodchucks. Instead, bears enter what is called torpor. When animals hibernate, they sleep through the entire winter and don’t wake up when they hear loud noises or even if they are moved or touched. In contrast, a bear in torpor can wake up fairly quickly at a noise or a touch.

Interestingly, unlike humans, who would either get bedsores or suffer muscle atrophy from lying in bed all winter, bears in torpor don’t experience significant muscle atrophy. This is most likely due to their ability to absorb their urine and recycle it into a protein that preserves muscle mass. 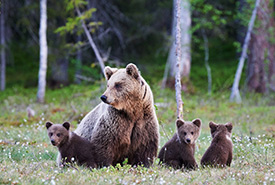 Grizzly bear mother and her cubs (Photo by Getty Images)

Grizzly bears have become "famous" thanks to pictures of them catching salmon in shallow rivers, such as in the streams of the Kodiak Archipelago of Alaska. However, due to climate change, some bears are switching from eating salmon to eating elderberries, as early warming causes the berries to bloom prematurely. Because bears in the archipelago previously ate up to 75 per cent of a salmon population in a region, researchers believe the dramatic increase in salmon populations will disrupt the entire food chain on the islands. For example, fish carcasses not only enrich the soil around rivers, they also provide an important food source to other animals.

Although grizzly bears eat a variety of different insects, moths are available to them in large numbers. Grizzly bears have been seen moving through boulder fields and turning over heavy rocks to feed on masses of army cutworm moths. A grizzly bear in Yellowstone National Park was seen to have consumed over 40,000 moths in one day. However, eating this many in a day is uncommon.

Canada is famous for its grizzly bears. Unfortunately, however, grizzly bears have been assessed as a species of special concern, meaning they could become threatened or endangered in the future. They are threatened by climate change, unsustainable hunting, habitat loss and extremely low reproductive rates. There are about 33,000 grizzly bears in the U.S. (mainly in Alaska) and about 26,000 grizzly bears in Canada (mainly in BC). Hopefully, Canadians are willing to protect grizzly bears and their habitat, because a future without these amazing animals would, indeed, be unbearable.

Roots is helping to protect Canadian habitat and the species that they sustain, including grizzly bears. Find out how, here. 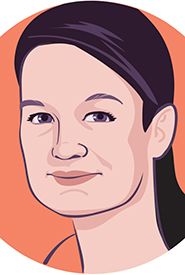 Karin Lehnardt has been a university writing tutor and writing instructor for many years and loves researching, reading, writing and discussing ideas.