Four surprising things I learned during my time at NCC 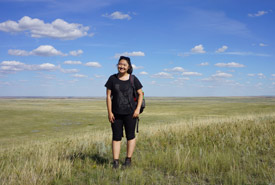 As my nine-week internship with the Nature Conservancy of Canada (NCC) drew to a close at the end of August, my supervisor kindly sent out a lunch invite to all my colleagues inviting them to celebrate my last day. While this thoughtful gesture is one of the many reasons why working for NCC has been so humbling and rewarding this summer, one particular experience that resulted from my supervisor’s lunch invite will be embedded in my memory forever.

I was typing away at my desk on a Friday afternoon when the Associate Regional Vice-president of NCC’s Alberta Region, Larry Simpson, popped by my desk and asked if I had time to see him in his office. Larry is known to be an NCC legend. He started with NCC as the western regional director in 1990, and started the Alberta regional office in his basement in the nineties. This caught my curiosity. What did Larry want to talk about?

Starting off, Larry joked that I was either going to be fascinated by a conservation legacy story in Alberta — the Waldron Ranch — or be bored to death by the one-hour history lesson.

It turns out, the things I discussed with Larry that afternoon in his office as a post-secondary student and exiting NCC intern will never leave my mind. For me, it was a reminder of why you should always be proud of the work you’re doing. Reflecting on my discussions with Larry, here are four things that make a NCC communications internship a valuable learning opportunity:

Sure, there are different aspects to working within NCC, including administrative, fundraising, science and communications; but at the end of the day, everyone is working towards the common goal of protecting our country’s most ecologically significant landscapes, and engaging with the public while doing so. Working at NCC requires you to be a Jack of all trades in many situations, and you really learn to appreciate the immense power that human capital can have in completing projects.

Despite being a communications intern, I also helped out at Conservation Volunteers (CV) events, dabbled in understanding how land securement works and talked to development coordinators about special events. I was never turned away for wanting to help on a different team. Whether you’re a volunteer, staff member, donor or supporter of any capacity, know that you are appreciated, welcomed and have valuable contributions to make!

You will learn tons of unconventional things

Since conservation organizations have an environmental focus, it’s easy to talk yourself out of getting involved if you don’t have a science background, but I found that to be the exact opposite. I come from a science background, having finished my third year at the University of British Columbia studying natural resources conservation. So for me, coming into the national communications intern role was an interesting change.

I learned tons of interesting, useful and unconventional things during my internship (read my blog: "A forestry girl in a grand communications world" here) that I wouldn’t have learned otherwise if I chose to conduct fieldwork the whole summer like most of my peers. As Larry explained to me, NCC is always looking for enthusiastic, positive and outgoing people who are beaming with passion about what they do. So don’t be afraid if you take up a role that seems to be irrelevant to your studies, because it really is more relevant than you think.

It changes your perspective

As the years go on, alarming headlines and statistics about the hottest year on record, extreme weather fluctuations due to climate change and the increasing number of endangered species no longer take us by surprise. It’s easy to be pessimistic when thinking about the future of our planet. But getting involved with NCC will definitely change your perspective. You stop thinking, “How could we possibly tackle this wicked problem?” and start thinking “What is the next step?” instead.

Throughout the summer, instead of feeling bummed out when I found out about a new endangered species, I began to look at the work NCC has done to protect endangered and threatened species in key conservation areas, and think about how we can keep this great work going so that more species can be conserved. Some of these species include increasing numbers of endangered sage-grouse populations in Saskatchewan at NCC’s Old Man on His Back property, and the announcement of 976 acres (395 hectares) of protected coastal properties in Nova Scotia protecting habitat for endangered mainland moose and piping plover.

As of 2016, NCC has officially conserved 2.8 million acres (more than 1.1 million hectares) across Canada. It’s these types of numbers and success stories that speak volumes, and really changed my perspective while working for NCC. I choose to celebrate our successes, work hard to learn from our mistakes and be ponderous every day, rather than to focus on the negative.

The individual may have left NCC, but NCC will never leave the individual. I have been told by countless staff, volunteers and NCC supporters that they hope to see me again either visiting the office, at a CV event or producing content for the blog.

Ever since day one, the calming atmosphere of NCC  and the wonderful work that everyone is set on accomplishing makes NCC feel like an old friend; a welcoming home. I will never forget my time working for NCC or the advice Larry gave to me as a young person trying to find their path in life. I have learned more things than I could have imagined, and experiences that will stay with me for a lifetime.

No matter what capacity you are involved in with conservation organizations, you have made the right decision to be a supporter and a voice. It’s important for us to be stewards, communicators and advocates for a healthy planet, working hard towards the common goal of protecting our beautiful home.