Badgered into respecting the wild 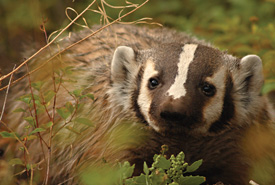 It was my co-worker Emily's and my first day out in the field without a manager — the training wheels were off. We were bright-eyed and bushy-tailed, ready to impress the property land managers with a thorough property inspection. This property inspection was in Saskatchewan’s beautiful Missouri Coteau, on the Nature Conservancy of Canada's (NCC's) Molde 3 property.

The property inspection was going well; we were identifying plants and admiring the beauty of Saskatchewan’s native prairies. I grew up in Northern Alberta, and Emily grew up in southern Ontario, so neither of us was too familiar with what Saskatchewan looked like beyond the Regina city limits.

I was walking along, near a wetland, looking down and testing myself on my plant identification skills. I looked up for a brief moment and saw some movement about 50 metres in front of me. 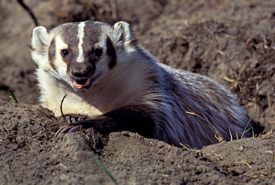 “Hey, there are some badgers up here,” I said calmly to my co-worker.

At this point I was in awe; they looked like they were digging burrows. I had never actually observed a badger in real life. I did, however, recall the YouTube video “The Badger Song,” which was a one-hit wonder when I was in high school.

The American badger has a broad, triangular head, pointed nose and short ears. It is a yellowish-grey colour with a white stripe surrounded by black fur on its face, starting on its nose and running back onto its shoulders. There is a dark triangular patch, or “badge,” behind its eyes, which is surrounded by white fur.

The badgers then turned toward me.

“Run!” Emily screamed, just as I was finishing my sentence. 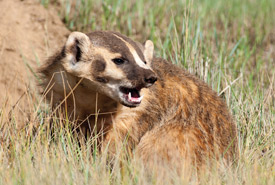 I did not question her instructions, although, on the run I managed to ask why we were running. Oddly enough, she did not answer my question and continued to run. We ran alongside a wetland, where some forbs and tame grass towered over the native grass. I looked back to see if the badgers were following us.

Badgers are a heavy-bodied and short-legged member of the weasel family, so I could only see the tall grass moving, but not the animal itself. I also looked at the wetland beside us, debating whether it was clean enough for us to escape by swimming across to higher ground. As it turns out, badgers can swim, so I don’t know how smart that would have been.

After we could no longer see them, or the grass, moving we slowed to a fast walk. We were still on edge. 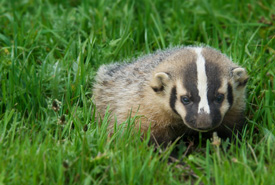 Once we caught our breath, Emily mentioned that she had stopped to check out some burrows in the sandy loam soil near the wetland earlier in the day. Badgers are fossorial, meaning they rely heavily on underground burrows for survival. These burrows serve as sites for food storage, sleeping, foraging and raising young.

Badgers are usually nomadic and dig out a new burrow every other day or so in the summer; however, females with kits establish a maternal den, which they use for an extended period of time until the kits are old enough to accompany their mother on above-ground hunting forays. Two to five young are born in early April, and as our adventure took place in June, we figured that we might have come between the badgers and their burrows, which may have contained cached prey. Or they might just have been trying to get to safety underground, and that was why they might have been following us.

These days, Emily and I are on very high alert when we come across what appears to be a badger burrow during field work. Their burrows have a pile of dirt next to the entrance, which may be plugged up by the badger if it is inside and feels threatened or to seal it off from cold winter temperatures.

Due to an increase in agriculture and development, badgers are facing habitat loss, a reduction in prey and an increased chance of becoming road kill. The Nature Conservancy of Canada works hard in Saskatchewan to protect our beautiful grasslands, which are vital habitat for the American badger and other awe-inspiring animal and plant life.

The American badger is one of nine species featured in NCC’s gift giving campaign: Gifts of Canadian Nature. To learn more and to give the gift of conservation this holiday season, click here. 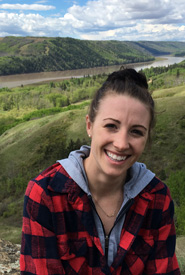 Carissa Sideroff is a natural areas assistant with the Nature Conservancy of Canada in Saskatchewan.