One of the greatest Canadian conservation success stories is that of the bald eagle. It’s hard to believe that such an iconic species was almost wiped out, yet today in Atlantic Canada, bald eagles are so numerous that we export them to the U.S. for conservation purposes.

I’ll never forget the first time I saw a bald eagle in all its majesty. I was in middle school at the time, and my father had just bought me my first camera. Boy, was I excited! Having a camera gave new purpose to exploring the forests and wetlands around my home, and I rarely left the house without it.

My family and I lived by the Nashwaak River, in west-central New Brunswick, where swimming, fishing and catching frogs were daily events, growing up. Along the riverbank grew huge white pine trees with gnarled, twisted branches reaching for the sky — just the place for a bald eagle to perch.

One morning, I was walking beneath one of these pine trees on my way to catch the school bus when I heard something shuffling above. I thought I saw some movement, so I crossed the street to get a better view. I was a little dozy at that hour of the morning, so at first I didn’t know what I was looking at, but then it dawned on me: staring down with all the sternness of an angry schoolmaster was a full-grown bald eagle.

My jaw hit the floor. I had never seen a bird that large, or angry-looking, before, and I could hardly believe my eyes! After the initial shock wore off, I found myself in a dilemma: without photo-evidence, no one would believe I saw it, but obtaining evidence would mean going home to get my camera and missing the bus to school.

Needless to say, I sprinted home, grabbed my camera and was out the door just in time to hear the beginning of my mother’s scolding. When I arrived back at the pine tree, the eagle was still perched there. The morning sun had just hit the top of the tree, illuminating the eagle’s white head against the light-green pine needles, as off in the distance, the school bus faded into the mist. It was a magical moment, and I’ll always have a blurry, half-exposed photo of something vaguely bird-like to remind me of that day.

Did I get in trouble? You bet I did. Was it worth it? Absolutely!

Bald eagles are now a common sight around the rivers of Atlantic Canada, and I get just as much enjoyment seeing them today as I did that very first time. Conservation efforts have allowed the species to make a remarkable recovery, and to me, the bald eagle is a symbol of what we can accomplish as a society when we decide that protecting land for species matters. It’s a great feeling to know that the bald eagle will be around to inspire the next generation of conservationists, too.

The bald eagle is one of nine species featured in NCC’s Gifts of Canadian Nature gift-giving campaign. To learn more and to give the gift of conservation this holiday season, click here. 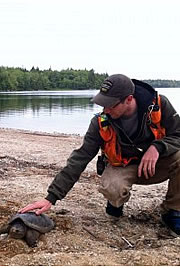