Something's Fishy: Ghosts of fishes past 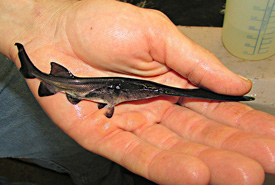 They’re there, lurking the depths of Canadian lakes and rivers, unseen by humans or other fishes. Ghosts of fishes extirpated or extinct from waters across Canada haunt other species and scientists alike. Their absence leaves an impression on habitats and, in their memory, a desire for a better tomorrow.

A species is considered threatened when a specific population is reduced by 50 to 70 per cent over 10 years or three generations. Factors that contribute to this depletion can be loss of habitat and the loss of genetic variation that would otherwise allow species to adapt to changes in the environment.

Once a species is threatened, it is more susceptible to endangerment.

Extirpation is very different from extinction. It occurs when a particular fish species is wiped out from a specific area or region. A fish species may be extirpated from a region but still exist somewhere else on Earth.

The paddlefish is a perfect example of this. This fish has a thick, robust body and can reach up to two metres or more in length. It is named for its long, paddle-like snout called a rostrum.

Although the paddlefish was likely never common in Canada, it is still considered extirpated from our waters. There are only three verified reports of the species in Ontario waters: in Lake Huron, the Spanish River and the Nipigon River. The last paddlefish in Canada was caught in 1917.

However, the species (often referred to as the American paddlefish) still exists in the United States, where it inhabits the Mississippi River from Montana to Louisiana and smaller rivers draining into the Gulf of Mexico.

Extinction is when an entire species of fish is completely annihilated from Earth. When there are no known sightings of a population of fish in any body of water across the world, it is designated as extinct.

Absent from all waters in Canada and across the world is the once small and mighty Hadley Lake stickleback. This species was known to only occupy Hadley Lake in British Columbia, for which it was named. Its extinction, designated in April 1999, was a result of nest predation by the introduction of brown bullhead.

The Canadian waters the once inhabited by these species are now their ghost towns. They may be gone but these fish species will forever haunt the lakes, bays and rivers they once called home.