Groundhog Day is a tradition that has always been dear to my heart, probably because it also falls on my birthday. Even though I’m not a groundhog, my family and friends used to tease me by saying that if I didn’t see my shadow on my birthday, it would mean another six weeks of winter. I’ve always wondered how such an odd tradition came about and decided to dig deep into its origins.

Groundhog Day derives from Candlemas, a festival that has been celebrated since the fourth century. Traditionally, observers would light candles on an early February day to brighten things up, and monitor the weather to see if spring was approaching. Many poems have been written to celebrate Candlemas, such as this Scottish couplet: “If Candlemas Day is bright and clear, there’ll be two winters in the year.”

Early Europeans later began enlisting hedgehogs to help predict future weather conditions, as the animals typically came out of hibernation at the start of February, during Candlemas. When German settlers started immigrating to present-day Pennsylvania, they brought with them Candlemas traditions, with one slight modification: Instead of using hedgehogs, they used a species native to their new dwellings: groundhogs, despite there being no relation between the two. If a groundhog saw its shadow, it would return to its burrow, meaning six more weeks of winter lay ahead. If it didn’t see its shadow, then that meant spring was fast approaching.

The first-ever North American Groundhog Day took place in 1888 in Punxsutawney, Pennsylvania, currently the hub of American Groundhog Day festivities. The tradition arrived in Canada much later in Wiarton, Ontario, when resident Mac Mackenzie, seeking an excuse for a celebration, initiated the first Groundhog Day event in 1956. To spread the word, he delivered invitations resembling press releases, one of which reached a reporter. At the event, McKenzie and others threw a button-adorned fur hat in the snow and photographed it, claiming it was a groundhog. The infamous photograph made it into the Toronto Star, gathering nationwide attention. For 60 years, Canada’s main Groundhog Day event has taken place in Wiarton, Ontario. 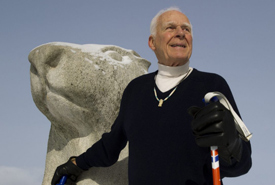 Later on, in the 1980s, McKenzie and other Wiarton residents spotted an albino groundhog, which they decided to call Wiarton Willie. Since this discovery, more visitors started coming from all over to witness Willie and his successors to predict spring’s arrival.

As fun as the tradition is, groundhog predictions have rarely been accurate. Data gathered from several decades show that Canadian groundhogs have been correct only 37 per cent of the time. But even so, there’s nothing wrong with being optimistic about an early spring.