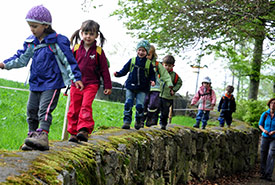 While the move toward using digital media in education reached universities and schools years ago, the educational concept of forest kindergartens is recently gaining more and more attention worldwide. This model for early childhood education focuses on teaching kids completely with and within nature. Originally established in Denmark, the concept was further developed in Germany — a country that, today, has about 2,000 forest kindergartens.

To learn more about the concept, I had the privilege of speaking with Ute Schulte Ostermann, chair of The Federation of German Nature and Forest Kindergartens since 2010. Ute is a certified teacher with a special focus on education and sustainable development. She has developed an official area of study called nature play pedagogy. She is also the author of a book and several publications on nature-based education. In 2017, Ute was awarded the Order of Merit of the Federal Republic of Germany.

Read my interview with Ute below:

Samanta Hoffmann (SH): Let's start right away with the chicken or egg question: What came first, your love for pedagogy or your love for nature?

Ute Schulte Ostermann (USO): The longing for nature has been a part of me since I was a child, just like my interest in caring for younger children. Nature and childhood simply belong together.

SH: In your work with the Federation of German Nature and Forest Kindergartens, you support nature-oriented and sustainable education. What is the difference between an ordinary and a forest kindergarten?

USO: All aspects of mentoring, upbringing and education that you can find in a "normal" kindergarten can also be found in the woods — in one way or another. In an ordinary kindergarten, the building and game material is usually well organized in cupboards and drawers. In the forest, on the other hand, kids find unsorted trees, bushes, flowers, stones, sticks, cones, moss, grass, leaves, fruits and mushrooms. And [they discover] an infinite amount of living "material," like deer, boars, anthills, spiderwebs, frogs, snails, squirrels, birds, woodlice, centipedes, ponds, brooks, puddles, mud, and dead wood with many inhabitants. Of course, this list is not complete since there are so many more things to discover.

SH: The kids play and learn with natural objects. Have you noticed a different development in the children's behaviour compared to ordinary kindergartens? 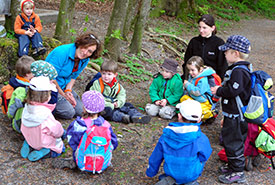 USO: The kids are very creative, concentrated, physically fit and sociable. There are no norms in the woods, and everything needs to be discovered and created by the kids themselves. Therefore, the kids get the chance to experience human development on their own. Their games are very imaginative, from hunting and gathering to cultivating land. Of course, they hunt dinosaurs, wild animals and build themselves little dwarf caves or elf castles. But they also arrange flats with kitchens and children's rooms. They also drive cars and boats, they have rockets and space stations, and there are shops where they deal in goods. The kids are doctors, police officers and firefighters. They act, and make music with nature’s instruments, like wood blocks, flutes and tree xylophones. These games include countless linguistic opportunities, such as counting, measuring, estimating and making hypotheses and comparing them. They design with colourful leaves, paint with soil and shape things with clay.

SH: This sounds incredibly active. Can any child join a forest kindergarten? I can imagine that there are special challenges for children with, for example, mental or physical disabilities.

USO: Yes, these kids will also be in good hands. There already are forest kindergartens that provide this kind of inclusion.

SH: The kids play and learn in nature all the time, but what happens when it freezes, snows or even storms?

USO: That isn't a problem at all because the weather in Germany is rarely extreme. There are special emergency shelters outside the forest, and the kids have appropriate clothing for each weather situation.

SH: You have just been to China to present and discuss the forest kindergarten concept. How do you explain the growing global interest in nature-oriented and sustainable education?

USO: In terms of early childhood education, childcare and upbringing, some countries in Asia have a backlog of demand for alternative/modern educational models like forest kindergarten. Education should always focus on the child's needs, not on the adult's ideas. Unfortunately, this is often overlooked in these countries. However, there are many approaches to meeting the children's requirements.

SH: Despite all the advantages, why are there still so many ordinary kindergartens?

SH: But still, after being in a forest kindergarten, all children have to go to conventional schools. Aren't schools based on nature-oriented methods long overdue?

USO: [Conventional] schools won’t change. However, there is a trend in Germany — initiated by parents of forest kids — to build nature schools where all classes that can be realized outside are held outside.

SH: The Federation of German Nature and Forest Kindergartens is very successful in promoting forest kindergartens worldwide. What is your advice to parents and communities that want to support their kids with environmentally aware education?

USO: Parents, community representatives and responsible offices, like building authorities, health departments, forestry authorities and youth welfare offices, should first visit and look at a forest kindergarten before they grant or refuse permission. 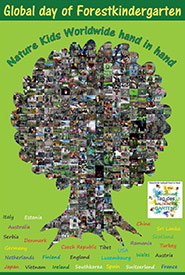 SH: May 3 this year will be the very first International Day of Forest Kindergarten. What is special about this day?

USO: Twenty-five years ago, on May 3, the very first official forest kindergarten was opened in Flensburg, Germany. This kindergarten started a worldwide trend to call attention to this educational concept. This is also the reason why we will host the second International Congress for Forest Kindergartens in Berlin in November this year.

Listen to the Forest Kindergarten anthem "Nature Kids Worldwide Hand in Hand" by Marius Tschirky from Switzerland below: 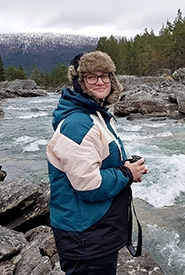 Samanta Hoffmann is a German culture editor with a master's degree in American studies and ethnology.