Heard it from a Scout: Sumac is nature's tasty candy 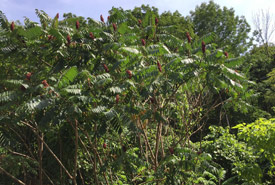 In my first year of Scouts, I went on a hike with my troop and discovered a strange-looking plant. One of the senior Scouts told everyone that it was called staghorn sumac and that it was like “nature’s sour candy.” I tried it and found that he was right. I was interested and wanted to find out more about this shrub. I discovered that it has a great deal of historical significance in Canada and abroad. Sumac is a tasty treat to have while hiking or camping. It can even be used to make beverages and spices!

Staghorn sumac (pronounced soo-mak) is a shrub or small tree that ranges from central Ontario to Nova Scotia. Historically used as a spice because of its lemony taste, it is packed with vitamins A and C and antioxidants. Honestly though, the best part is it provides a tasty, on-the-go snack for hikers and trippers who forage through the bush. 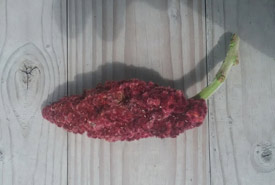 Staghorn sumac has great historical significance. In the early 1700s, the English used sumac as a decoration. In North America, Indigenous peoples initially used sumac for spiritual purposes. Traditionally, the berries were mixed into tobacco to be smoked, a practice that is still common today.

It was also used to make a juice, which the Cherokees called quallah. Sumac berries were put under hot water to create a tasty lemony drink. Quallah was and is still used today to mark many ceremonies and traditions.

How to identify sumac 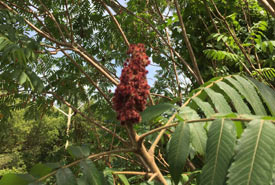 Staghorn sumac with a cluster of red, hairy berries (Photo by Kaelem Moniz)

Staghorn sumacs (native to Canada) are shrubs or small trees, which at their largest are five metres tall and six metres wide. The leaves range from 25 to 55 centimetres in length, each with nine to 31 leaflets that are six to 11 centimetres long. It is the tallest of the sumacs and can be distinguished by its large clusters of red, hairy berries that ripen in the fall. Sometimes the fruit lasts through the winter or even the next spring!

Sumac: Part of the outdoors to be enjoyed!

Sumac is a tasty snack. You can make sumac tea, lemonade, spices and more. Make it part of your next camping experience! When you are on a hiking trip, where foraging is permitted, and you see some sumac, take a fruit or two and try it out. Remember to only try wild foods that you can positively identify! It is important to take the time before your hike to learn the difference between the edible and the poisonous plants. If you’re in doubt, don’t take a chance. You will soon learn that the sumac berry is one of the tastiest “candies” nature has to offer.

"Heard it from a Scout" is written by members of Scouts Canada’s Youth Spokesperson program. This post was authored by Kaelem Moniz.