Wetlands are a pivotal part of Canada’s environment. They play a vital role in maintaining the natural balance of ecosystems. Wetlands are areas of land that become submerged or saturated with water either year-round or throughout part of the year. Classified into either salt water or fresh water, wetlands include swamps, bogs, fens, peatlands and shallow waters. Wetlands cover about 14 per cent of the land of Canada, according to the Government of Canada, but their area has greatly decreased in southern Canada.

Wetlands act like natural sponges, soaking up water and slowly releasing it back into the ecosystem. This can help reduce damage caused by flooding and replenish the groundwater systems, which is vital during dry periods. Wetlands also act as natural filtration systems, removing excess fertilizers and pollutants and transforming them into plant life.

There are a variety of regions across Canada that feature wildlife and plants that are unique to each area, making them crucial to maintaining balanced ecosystems. Preserving these integral regions begins with understanding how the ecological wellness of Canadian wetlands affects their surrounding areas and environments.

Formed by the retreat of glaciers, the Prairie Pothole Region provides crucial stopover and breeding habitat for waterfowl and shorebirds. Conversion of wetlands to agricultural and urban lands has impacted many wildlife species, including the endangered piping plover.

Wetlands on Canada’s East Coast act as a buffer in reducing erosion and flooding, and provide critical habitat for many species of birds and fish. Since European settlement, 65 per cent of the salt marshes in New Brunswick, Nova Scotia and PEI have been altered or destroyed. This has resulted in a significant loss of wildlife habitat and biodiversity. By conserving natural shorelines and coastal salt marshes, communities can minimize the impact of storms, and provide habitat for wildlife, like black ducks, that winter on Canada’s East Coast.

This region in southern Ontario and Quebec is one of the most populated areas in the country. The Great Lakes hold close to a fifth of Earth’s surface fresh water. They are used for drinking water for both people and animals as well as in many industries. Almost 70 per cent of the wetlands in this region have been lost.

The Pacific Coast is host to major migratory pathways, which serve as rest stops for migratory waterfowl. Approximately 80 per cent of the wetlands in parts of this region have been lost, reducing the number of suitable breeding grounds and habitat for wintering birds.

We can all do our part to protect local wetlands. Environmental stewardship is a pillar in Scouting. Local Scouting groups participate in a variety of initiatives to help protect and preserve Canada’s wetlands.

Lend a hand to help wetlands 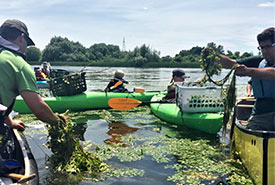 One way Scouts get involved is through creek and shoreline cleanups. My group, the 6th Erin Mills Scout Group, has been doing cleanups in the Rattray Marsh in Mississauga, Ontario, for many years. It is astounding to see all the different items that are thrown into the marsh, including mattresses, bicycles and even grocery carts! Our group was able to help open the waterways and dispose of harmful waste so that the plants could flourish once again, and reduce the risk of animals eating the litter or getting caught in larger pieces of debris.

Another way to help is by removing invasive species from ponds and other wetland areas. For example, in 2017, the 23rd Nepean Scouts kayaked through the Rideau Canal and collected 130 kilograms of European water chestnut, an invasive aquatic plant. The removal of other invasive species like European common reed (or phragmites) in Ontario wetlands is extremely important to the survival of native species.

Volunteering, reducing the amount of water you use or simply picking up litter are all small ways you can take action to help protect wetlands and shorelines. Going to a local conservation area is a great way to find local initiatives that need volunteers. Wetlands are beautiful and diverse regions that are vital to the health and balance of Canada’s ecosystems. Protecting them is essential to sustaining the environment.