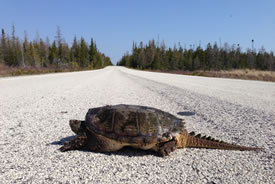 I see a large dark shape ahead. As I drive closer, I begin to make out a long, outstretched head and neck and an even longer, trailing tail and I realize that it’s a large snapping turtle. It’s sitting right on the white line of the road, slowly taking in its surroundings, slowly contemplating moving forward. The problem is, I can see there’s another car approaching in the opposite direction, and while our cars are hurtling along towards the turtle at 80 kilometres per hour, the turtle is proceeding at, well, a turtle’s pace.

Will the other driver see the turtle? If they do, will they notice too late and clip the turtle’s outstretched head?

This scenario is playing out across Ontario’s road network right now. The weather has finally started to warm, and the turtles, like all Ontario wildlife, are slowly getting down to business. It’s time to move into their favourite wetlands for foraging, time to soak up the afternoon sun and, soon enough, it will be time for the females to lay their eggs. All this activity means that turtles end up crossing roads more and more this time of year. And, here’s the thing — turtles, in addition to being slow, contemplative creatures, aren’t all that bright. They don’t know they’re in danger on a road and they don’t learn that roads are dangerous because they either get across in one piece or not.

Unfortunately for Ontario’s turtles, the chance of getting across the road in one piece is not great. 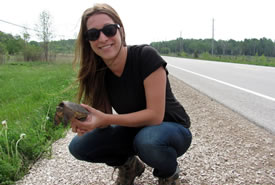 Tricia Sinissen holds a snapping turtle, ON (Photo by NCC)

With this in mind, two years ago the Nature Conservancy of Canada (NCC), in partnership with Trent University (with funding from Mountain Equipment Coop, the Ontario Ministry of Natural Resources’ Species at Risk Stewardship Fund, Species at Risk Research Fund and Environment Canada’s Habitat Stewardship Program), launched a study of the turtle and snake road mortality on the Northern Bruce Peninsula. Graduate student Tricia Stinnissen and her assistants cycled select roads on the peninsula nearly every day during spring, summer and fall for two years, meticulously recording every snake, turtle, frog and toad that they encountered dead or alive. 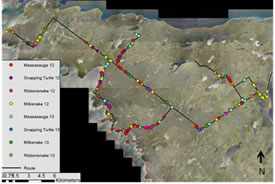 The results were alarming. A map showing the point locations where animals were found by Tricia and her assistants looks more like a road map because there are so many points. NCC is now using Tricia’s data and working with Eco-Kare International, a consulting firm specializing in road ecology, to install barrier fencing (funded through Environment Canada’s Habitat Stewardship Program). The fence will run parallel to the road, funnelling in towards an under-road culvert.

This year Tricia will be monitoring the new fencing to determine if there’s a significant reduction in the number of animals being hit on the road and whether turtles and snakes are effectively being funneled towards and through the culvert. If successful, the barrier fencing being installed on the Bruce Peninsula will reduce the number of turtles and snakes being killed at that site. Hopefully it will become the first of many such sites at one particularly bad spot for road mortality on the Bruce Peninsula where turtles and snakes are prevented from accessing the road during their daily activities.

But back to my turtle lumbering across the road with two cars hurtling towards it. Fortunately on this particular instance I was able to pull over, warn the other driver and then carefully move the turtle. As I watched it slowly lumber down the slope towards the small pond on the other side of the road I thought about how lucky that turtle was that someone was there to help it across safely. I was also glad that NCC and its partners are working to address this ever-increasing problem within the Northern Bruce Peninsula so that at one site at least, the turtle and snakes won’t have to depend on people to help them across.

What to do if you find a turtle on the road?

If you find an injured turtle on the road contact the Kawartha Turtle Trauma Centre. They have volunteer "turtle taxis" across southern Ontario who shuttle injured turtles to the trauma centre for care.