Hidden gems in the Darkwoods 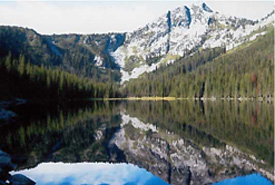 In the Nelson Range of the southern Selkirk Mountains in eastern British Columbia lies a large area of great natural variety and beauty, much of which has been set aside to protect and manage its ancient forests and habitat for rare caribou herds and threatened grizzlies in the region.

For a number of decades, this region had been managed by a private operation founded by a German duke, Carl Herzog von Wurttemberg, who named the area “Darkwoods.”

Born and raised in Nelson, BC, I have had many opportunities to fish, hike and climb in the Nelson Range with my brothers and, later, my sons. While living in Africa, I climbed Kilimanjaro and travelled to hike mountain peaks in other parts of the world, yet I always return to hike at Darkwoods — even as recently as this past summer, at age 78. My favourite climbs in the Nelson Range are Ymir Mountain (2,398 metres/7,867 feet); Baldy Mountain (2,327 metres/7,636 feet); Wurttemberg (2,377 metres/7,799 feet); and The Three Sisters (2,387 metres; 7,831 feet). 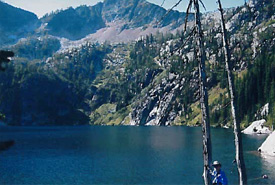 In one of the Nature Conservancy of Canada’s (NCC’s) pamphlets, the magnificent features of the property are accentuated: “the lush valleys, rugged peaks, tumbling creeks and deep lakes of Darkwoods are both astoundingly beautiful and ecologically important.” My quest to search for the “hidden gems” in the Darkwoods in the form of these exquisite subalpine lakes has been well rewarded. There are about 50 lakes tucked away in the property, most of which are very difficult to reach, and all requiring special permission to visit.

I have selected the five largest of these jewels for an “armchair” tour, which may inspire other readers to explore them for themselves:

This is the largest lake in the Darkwoods, with a large, sweeping vista. The lake often looks black, depending on the time of day. A fine blazed trail through a pristine forest led to the lake at one time, but it was obliterated in 2007 (just before NCC purchased the property), replaced by a road that almost reaches the shoreline. This road has since been deactivated and is being restored to a hiking trail. Fortunately, the grand vista is still intact, and is now protected forever. 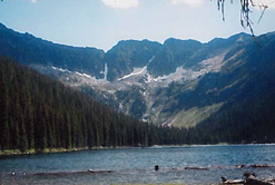 This magnificent lake deserves all the protection it can get. It is surrounded by grand forests and a bejewelled, crown-like cirque studded with granite peaks and patches of snow. 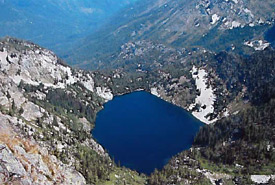 This jade-hued sub-alpine lake, named after the German duke who gave the name “Darkwoods” to the area, is probably the deepest of the lakes. At the time, we required special permission to hike into this part of the Darkwoods. Public access is no longer allowed on this portion of the property, to protect sensitive habitat. 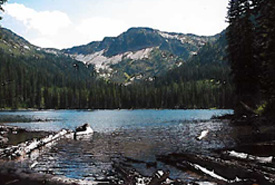 This is easily the most accessible of these featured lakes. It is also called Amilson Lake, after a local man who stocked the lake with cutthroat trout in the 1930s using a cedar backpack filled with water and carried up from the valley below. This lake can be reached by a short hike on a deactivated logging road that branches south from the main Porcupine Creek at the top of a high hill. We saw a grizzly bear from the trail — fortunately from a good distance! 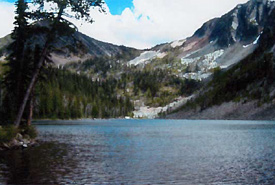 This attractive lake, to which my brother David and I bushwhacked this past summer, is located close to Porcupine Lake, but it drains into Cultus Creek. We relied heavily on our topographical maps through the dense underbrush. None of our maps had the name of the lake, but we learned afterwards that it has been named, unofficially, Wolf Lake (not to be confused with the nearby Wulf [Waldie] Lake, which is outside NCC’s designated area). My personal interest in this lake was triggered by photos in NCC’s 2013 calendar taken by Bruce Kirkby from Kimberley, BC.

All five of these scenic jewels are now managed and protected by NCC. It is hoped that these natural treasures will remain intact for future generations to enjoy. 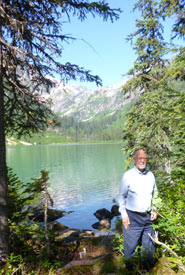 John Anonby is a retired English Professor who taught at the Universities of Western Ontario, Manitoba and Trinity Western in Canada, and Pan Africa Christian University in Nairobi, Kenya.