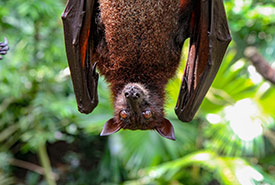 A bat hanging upside down (Photo by Unsplash)

Just as noise pollution negatively impacts human health, it also affects wildlife. It can interfere with animal communication, hinder their foraging abilities and impact where they live.

A recent study published in Biology Letters found that human-created noise is affecting a wide range of animals — from birds, fish, mammals and amphibians, to arthropods, mollusks and reptiles. Noise pollution, also known as anthropogenic noise, is caused by cars, trucks, airplanes, ships, oil extraction, factories, industrial activities and sounds from cities, among others. Researchers found that wildlife in many different land- and aquatic-based ecosystems showed significant responses to human-created noise. 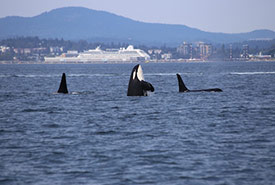 For example, bats use ultrasonic sound waves to get around and to locate their prey. However, noise pollution interferes with this and causes them to spend more time and energy locating their food source. Shipping lanes in the U.K. can be deafening to gray and harbour seals, and noise from ships are seriously impacting orcas’ ability to navigate the ocean, forage and avoid potential hazards, according to episode 2 of CBC’s Killers: J pod on the brink. And it’s no secret that many human-created conditions, like noise, are changing the behaviour of birds. You may be surprised to learn that plants are also impacted, since pollinators often relocate to quieter areas.

Not unlike the impact of light pollution on insects, as discussed in a previous post, noise pollution is causing change. It can alter the types of species living in many different ecosystems, which in turn impacts the functions of these areas, according to The Guardian.

The good news is that if noise is reduced or simply turned off, it more or less removes the issue. The impact does not linger in the same way as other forms of pollution, like plastic or chemicals. And efforts are already underway in Canada.

BC Ferries is working to reduce and lessen the effects of underwater noise, especially along ferry routes that pass through critical habitats. WCS Canada is encouraging the federal government to increase protective measures in the Arctic. They’re also working with international colleagues to address the increase of noise in the region as a result of new shipping routes.

While these initiatives demonstrate progress, tightening rules and regulations around noise pollution is an important measure for conserving wildlife in Canada.