If you’re Batman then I must be Robin, right? 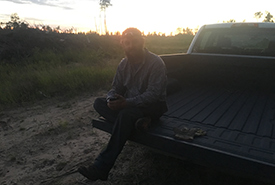 Joe Poissant's (a.k.a. Batman's) office in the country (Photo by NCC)

I feel like there might be some real merit in an ecologist superhero movie. Hear me out before you rate me on Rotten Tomatoes.

This summer I spent a couple of nights trying my best to help the Nature Conservancy of Canada’s (NCC’s) contract biologist, Joe Poissant, catch some bats on one of our properties. I’m really not sure I was much help, as my main physical attribute as NCC Saskatchewan Region’s science guy is having long-enough legs to step over barbed-wire fences without assistance (a pretty good party trick with the right crowd). I have no innate ability to resist rabies (more on that later), cannot operate a mist net (not as wet as the name implies), and I strongly dislike staying up really late — all of which, Joe (a.k.a. Batman) does with, I can confidently say, heroic ease. 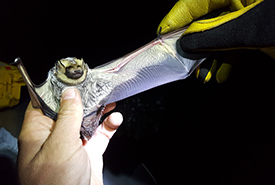 Like all superheroes, Joe has a complicated backstory filled with twists and turns. Raised by wolves, Joe’s first brush with death came during a cash-for-blood, MMA-style fight in the Rocky Mountains of Northern Alberta. Oh wait. Sorry, no — that’s another superhero. Joe, originally from Nova Scotia, has caught bats across the western hemisphere. I believe he ultimately brought his biology skills to Saskatchewan because of our fine, gas station pastry, but I digress. Joe has a lengthy bat-catching pedigree, or at least that’s what I have assumed from the stories he told me while we sat in the bed of the pickup truck at two in the morning in the middle of summer while I realized that even at this latitude (53.279831°, in case you were wondering) the sky doesn’t really get dark, but that I do get tired…where was I?

Right. While waiting for bats to blunder into our three mist nets (imagine a badminton net with pockets, strung between two poles in a treeless corridor in the forest) at stupid o’clock at night, Joe told me a lot about bats. I mean, we talked about a lot of things because when I’m that tired, my conversational skills are all over the place. He told me about how a researcher caught a banded myotis bat (Brandt’s myotis, which is similar to the species we were trying to catch) that was 41 years old (it was banded as a juvenile and caught again 41 years later), and that bats that survive their first years have a good chance of surviving to bat old age.

We also talked about how this project was contributing to the overall understanding of bats in Saskatchewan and will contribute to their future conservation. Joe told me that white-nose syndrome has yet to reach Saskatchewan and that understanding the populations of the little brown myotis and northern myotis will be really important if it ever does. The conservation community in Saskatchewan will have a better idea of the population of bats and what efforts need to be taken to protect them. We even got to talking about the value of bats in controlling mosquitoes, but that probably was influenced by the amount of DEET I applied (spoiler: I was absolutely soaking in the stuff).

In between these conversations and trying to identify a crashing sound in the trees that was way too close to the truck, I also found out that bats really do carry rabies and that the connection between bats and vampires isn’t that crazy considering that the vampire bat feeds on the blood of livestock. 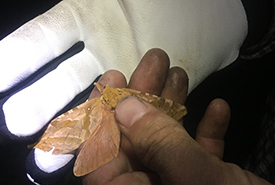 One of many moths we caught. The gloves are for the bats, not the moths. (Photo by NCC)

During my evenings with Joe, we would check the nets for bats every 15 to 20 minutes. All we caught when I was there were moths. But when Joe does catch bats, he trims the hair between their shoulder blades and glues a tiny radio transmitter to their skin (it weighs less than five per cent of their total body weight and doesn’t inhibit their flying). Once he lets them go, they resume hunting down insects by echolocation (he also has a device that lets you hear what those calls sound like). The transmitter keeps beeping for about three weeks, but before it stops, Joe identifies their roost trees and records the size, species and surrounding vegetation. This information will help us manage properties, with bats in mind. 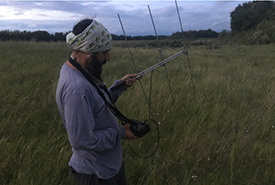 Following the beeps to find the peeps...I mean the bats. (Photo by Joe Poissant)

One of the nights I was working with Joe, he let me use the radio receiver to track a bat and its roost mates to their roost. Not quite chasing down villains in the gritty alleys of Gotham City, but I did have to battle my way through a thick tangle of beaked hazelnut growth while listening to a beeping sound get louder and softer depending on what direction I pointed the antenna. It was intense. The night before, at the old roost, we counted 36 bats exiting an aspen tree no bigger around than my leg.

Joes shares more similarities with crime-fighting heroes. His extensive bat trapping experience makes him pretty comfortable talking to complete strangers about the bats they’ve seen in their lives. He has done a lot of educational work to inform people about the benefits and wonders of bats. He has helped people and bats avoid conflict when they share the same home, by helping people close up attics that have become a home for bats without harming the bats.

The work that Joe is helping NCC do is providing a baseline of knowledge. We will have a better handle on what species of animals use our properties and how to manage the property for those that are rare or endangered. 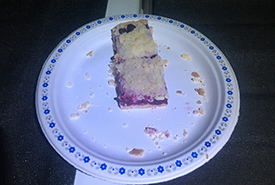 Every super hero has a weakness. (Photo by NCC)

If white-nose syndrome ever makes it to Saskatchewan, Joe’s work will help conservation efforts here too. Joe can’t help but be a goodwill ambassador for bats. I guess once you’ve been bitten . . . okay, bad analogy. Let’s see. When your dreams of chasing bats take flight — no, that’s a little fluffy. Look, I don’t know why he does this stuff. Do you really need a reason to do conservation science if you’re Batman? I think I found his kryptonite though. He is susceptible to my wife’s baking. I’m not at liberty to divulge more than that; I’m just saying that if you want to get on the good side of an ecologist superhero, you could do worse than to ply them with baked goods containing blueberries.