In the absence of nature 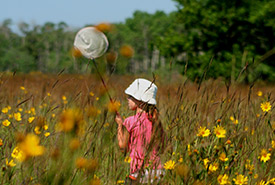 I've become very familiar with the concept of cabin fever while at university.

It is the week of final exams and I have studied for days, either at the library or at my dorm. Sitting among all the papers and study notes, I begin to feel antsy from the four walls of my room. When this happens, I always try to take a walk outside. Even at my cluttered university campus in downtown Toronto, the sight of the greenery and the warmth of the sun makes me feel instantly refreshed.

Indeed, staying inside the house for long periods of time can make anyone feel stir-crazy. It doesn’t help, either, that the Canadian winter is so harsh, causing us to seek the warmth of our homes. While interacting with the nature in your neighbourhood park will certainly make you feel better, there is nothing like walking through a forest, stepping into leaf litter and soaking in the calm. Experiencing nature used to be considered a frequent activity in the past for both adults and children, so why is it less common now?

Our current lifestyles reduce our daily activities to sitting in artificially lit rooms, with little to no exposure to green spaces, limiting our once-common interactions with nature. In 2009, journalist Richard Louv named this modern phenomenon “nature deficit disorder.”

Although not considered a medical disorder by the International Classification of Diseases, nature deficit disorder describes a set of harmful and extensively studied conditions that can arise when we are lacking the needed exposure to the great outdoors. 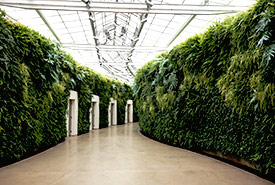 Vertical gardens add life and colour to any room. (Photo by Wikimedia Commons)

Renowned American biologist E.O. Wilson stated, “nature holds the key to our aesthetic, intellectual, cognitive and even spiritual satisfaction.” He hypothesized that humans have inherent “biophilia.” This is a natural need to catalogue, understand and interact with other species. It is why an empty room looks better with potted plants and why white walls come alive with vertical gardens.

A disregard for our biophilic needs — from fewer interactions with nature to apprehensions about dirt — can leave us with negative moods and decreased attention span, making productivity worse.

Children who grow up with no access to natural areas may have to pay the price for their separation from nature. Growing up in the modern age with parents who are fearful of the dirt and diseases that come with the outdoors, children can, instead, identify more with Pokémon than the species present in their backyard or neighbourhood, as noted by researchers.

The lack of exposure to nature has brought upon another problem: a nature knowledge deficit. How can someone with no knowledge of nature or attachment to species support a future of conservation, much less understand its necessity? 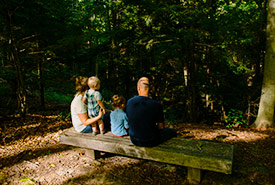 Spending time in nature is healthy for both adults and children. (Photo by Neil Osborne)

Direct experiences with nature are needed for both adults and children. Fulfilling our biophilic needs by discovering the natural world around us gives us all a moment to have unstructured play time, which ultimately leads to better mental health.

To many of us that live in urban areas, it can be difficult to access nature outside of the city. A great initiative in making nature accessible to the urban crowd is Parkbus ActiveDays, where a trip outdoors is not only inexpensive, but can also help build friendships and community with fellow nature lovers.

Parkbus’s recent collaboration with the Nature Conservancy of Canada’s (NCC) Conservation Volunteers program allowed Torontonians to join in active conservation work and helped increase awareness for the native species that are important to our Canadian ecosystems. The more people realize the importance of being outdoors, the more we can re-integrate nature back into our lives.

As biological beings, we are part of nature, so why are we voluntarily limiting ourselves from the very environment that shaped our identity? It is time to get back outside again.