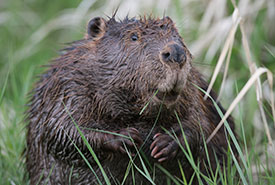 Emily Little is leaving Saskatchewan. In fact, by the time you read this, she will have left already. As part of the tidying up at work that happens when someone winds down their stay and moves on, Emily and I talked about things that should be done, including a blog post to commemorate International Beaver Day.

I know you are expecting me to tell a few jokes about my favourite deep fried pastry — beaver tails. But get your head out of the confectionary cart, because this story is about beavers, those water-dependent rodents that create and maintain wetlands.

Most people know that beavers build dams, which regulate water flow. These dams can reduce flooding and safeguard against drought while reducing soil erosion by allowing sediment to settle in ponds. Beavers also create different kinds of habitat when they cut down trees and alter the flow of water. This makes them an important part of a fully functional ecosystem, but also makes them tricky neighbours.

Growing up near the aspen parkland ecoregion of Saskatchewan and close to Prince Albert National Park with Grey Owl’s cabin (beaver trapper turned naturalist), I knew the story of how hunting for the sake of fashion nearly wiped the animal out. Working with the Nature Conservancy of Canada (NCC) in that same part of the country showed me first-hand how beavers have returned.

I think over time, the people of Saskatchewan have started to redefine ourselves from hewers of wood and drawers of water whose work it was to dominate nature. We grew up with stories of ploughing the land, literally wrestling bears and fighting off angry beavers. Over time, we’re becoming more aware and accepting of nature. We are starting to appreciate the services of an intact ecosystem. Some of the front-line work Emily and I performed during her time in Saskatchewan put us into contact with people who’d experience both paradigms. This is one of those stories. 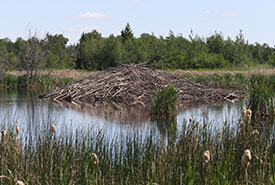 Okay, so Emily and I were north of Saskatoon, meeting over coffee with a few of the ranchers that NCC works with in the area. We discussed the land, how many livestock it could hold, when it should be grazed and the challenges of managing land in a forested area. There are things that our southern Saskatchewan rancher neighbours don’t have to consider as often, like trees in general (and how having one fall on your fence doesn’t ruin your day, but a year’s worth of fallen trees on a mile of fence might ruin your month), wolves, bears and beavers. So, while we did spend most of our time hearing about legitimate land management concerns, the stories from the ranchers that caught my imagination were the ones about the way things used to be.

One of the older ranchers had me especially hooked. He told us about rescuing an orphaned black bear cub when he was a kid (my kids found a kitten under our shed last year — nearly the same). As his pet bear grew larger, the rancher invited people from around the area to his yard to watch him play with the bear, something my local zoo definitely discourages.

Emily and I finished our coffee, hopped in our truck and were just about to pull out of the driveway when the rancher, who'd followed us from the kitchen, leaned his arm on my window to tell one last tale (tail?).

His story, from many years ago, starts with an angry beaver. Actually, the story probably started with the rancher who had, following the accepted norms of the day, decided to rid the world of one more beaver. We didn’t go into the details of why this beaver had to go, but in the process of trying to shoot the beaver, his gun jammed and the beaver, apparently seizing the opportunity to end this one way or another, moved closer. No longer satisfied with felling trees, the beaver tried to take the rancher down with his oversized chompers. The rancher fixed his gun and then fixed the beaver, but the damage was done. And I gotta tell you, I didn’t believe the story as he was telling it until he lifted his pant leg and showed a massive scar that approximately matched what I would guess to be the bite pattern of a beaver exacting his revenge.

So, what is the point of this story?

My experience has been that some of our attitudes about wildlife and their impacts on the land have changed over time. I’m not saying that ranchers and farmers have switched from shooting beavers to petting them (seriously, I wouldn’t attempt that. Who knew they could move so fast?), but we, as a society, have made some movement toward understanding and accepting the role they play on the landscape. As society begins to value and understand ecosystem services that it depends on, like slowing the flow of spring snow melt and storing water in droughts, various levels of government enact policies that allow humans to live with other species on the land.

And we know from other landowners in the area that beavers have moved back into the area and though they are still hunted or trapped as nuisance animals, I have seen evidence of beavers being allowed to do their thing and making a difference in the area.

These days, I am more aware of beavers on the landscape and how they change the landscape for their own benefit and sometimes to society’s benefit as well. Now, as I drive through the area, I look for beaver lodges with their floating mats of branches ready for a mid-winter snack. And I have my favourite little stream that I like to keep an eye on with its series of beaver dams reaching back as far as I can see. I keep an eye out for animals that eat vegetation that grows in areas that beavers have altered or that prefer more water for their life cycle. And I listen for landowner stories of fur-bearing animals that rely on this kind of habitat making a return and about improved water amounts during dry periods because of the prevalence of beaver dams. While increasing beavers on the landscape can damage roads and flood fields, we need to consider their benefits to the ecosystem as well.