Invasive species are a lot like...breakfast! 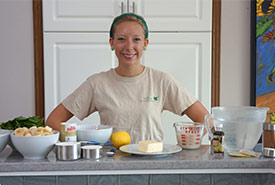 Maggie Cascadden demonstrates how BaDandelion muffins are made (Photo by NCC)

Weeds: every lawn, garden and even sidewalk seems to have them. They are pesky and stubborn, and have been known to cause severe frustration. A weed is classified as invasive when it travels 100 metres within 50 years, which is really fast considering plants can’t get up and move around! 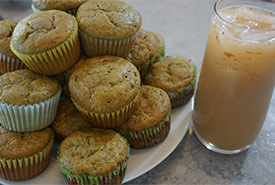 Just like how breakfast gives you a head start because it is the first meal of the day, many invasive species get a head start because they grow before native plants do! Take downy brome, for example. It’s a nasty invasive grass that can be found in Southern Alberta and throughout much of Canada. Not only is it difficult to deal with because the seed bank easily becomes integrated into the soil, but also because the plant grows early.

Downy brome’s seeds are not resistant to hot weather, so the plant germinates early or late in the season. Although this particular plant has a hard time establishing in sites where perennials already exist. However, once it does establish itself, the early germination time of the seeds help downy brome to outcompete other plants for water. As a result, the invasive grass succeeds over other, native plants. This is a key reason why weeds thrive over native species.

We’ve all been here: it’s 8:10 a.m. and you need to be out the door by 8:15 or you’ll be late for work. Thing is, you haven’t had any breakfast, so you need to eat something quickly. Weeds are this way: they can do their thing fast.

Take, for instance the weeds at our recent orange hawkweed pull Conservation Volunteers event near the North Saskatchewan River in Alberta. Conservation staff had visited the property just 18 days before the event to confirm where volunteers would target the hawkweed. At this time, the hawkweed was just starting to flower. When the event happened just two and a half weeks later, the plant had already flowered, gone to seed and the seeds had dissipated! 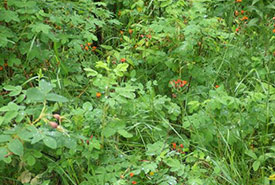 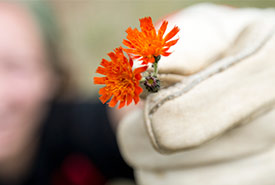 
In just 18 days the plant had completed its flowering and seeding cycle. This is partly due to its ability to reproduce asexually and produce seeds rapidly. The rapidity of cycles varies year by year due to variability in the environment, but regardless, such a short window can be scary when you have limited resources and can’t be certain of when the window will occur. Without flowers, many weeds are hard to notice and identify, making their discovery during the flowering stage even more critical.

Finally, breakfast and weeds are both unrivaled. Breakfast, in my opinion, is the unrivaled best meal of the day. Similarly, invasive species are hard to rival in nature. While native plants have to contend with natural predators and diseases, many native animals don’t know what to do with these alien species and thus leave them alone. If two individuals are competing for the same soil nutrients, water and sunlight, and one has the added challenge of fending off hungry insects and disease, the odds are in favour of the other plant.

The challenge of invasive species is that they lack the natural predators and disease that keeps their population in check in the environments they evolved in, giving them an advantage over native plant species. 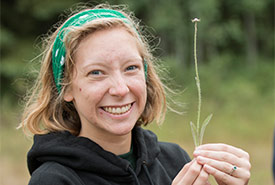 Maggie Cascadden with an orange hawkweed (Photo by NCC)

The weed issue is a critical one: according to the International Union for the Conservation of Nature (IUCN), invasive species are the second most important cause of biodiversity loss after land use changes.

It sounds daunting, but there are lots of ways you as an individual can make a big difference!

Still wish you could do more? Bite back! Volunteers were recently given the opportunity to try invasive species-themed breakfast snacks at Thistle Do Nicely, the 10th annual thistle pull held at Clifford E. Lee Nature Sanctuary in Devon, Alberta. We made iced dandelion root tea latte and "BaDandelion" muffins, both of which were a hit!

Click here to get the recipe cards of these tasty treats, and watch the video for a step-by-step guide to these invasive snacks. Don’t forget to check out last year’s recipes and videos in the blog, "A dandy way to bite back for conservation!"